In a story that’s related to Dr. Maloy’s presentation, a 3 February 2017 article by Megan Fellman entitled, “Changes in astronaut’s gut bacteria attributed to spaceflight,” provides the first results of a comparative analysis by Northwestern University researchers on changes in the gut microbiomes of NASA astronaut identical twins Scott and Mark Kelly. As part of a NASA experiment to examine the effects of long-duration space missions on humans, Scott Kelly was continuously in orbit on the International Space Station (ISS) for 340 days during 2015 – 2016, while Mark Kelly remained on Earth and served as the control subject. 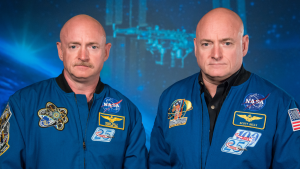 The key points reported by Northwestern University researchers were:

You can read the complete article on this Northwestern University research at the following link:

So far, it looks like the human gut microbiome may not be a limiting factor in long-duration spaceflight.