RankingTheWorld has created another fascinating timeline video, this one ranking the top 15 companies in the United States by revenue from 1954 to 2018. RTW explains that “the data is taken from the annual Fortune 500 list.  Fortune includes in its list all public and private companies that file financial statements with the government, and are incorporated and operate in the U.S.”  You’ll find their video here:

Within each calendar year, you’ll see quite a bit of volatility in the relative positioning within the top 15 companies, often with some companies falling below the top 15 threshold and new firms arriving to take their places.

Through the 64 years of data, the changing complexion of U.S. industry is evident:

Following are screenshots from the RTW video that show an instant in the starting and ending years (1954 & 2018) and at the start of each decade in between.

I think you’ll enjoy RTW’s five-minute video.  The detailed action happens quickly, so remember that you can use the YouTube Settings control to adjust playback speed.

Thanks to Lyncean member Mike Spaeth for letting me know about this RTW timeline video.

You can watch all of RTW’s videos on their YouTube channel here: https://www.youtube.com/channel/UCFRoQ_PH8Ho5bUQb443PPqw

Ian Fraser is an award-winning journalist, commentator and broadcaster who writes about business, finance, politics and economics.  In 2018, under the banner of WawamuStats, he started posting a series of short videos that help visualize trends that are hard to see in voluminous numerical data, but become apparent (even a bit stunning) in a dynamic graphical format.  On its Facebook page, WawamuStats explains:

“Historical data are fun, but reading them is tedious. This page makes these tedious data into a dynamic timeline, which shows historical data.”

Regarding the GDP data used for the dynamic visualizations, WawamuStats states:

“Gross Domestic Product (GDP) is a monetary measure of the market value of all the final goods and services produced in a period of time, often annually or quarterly. Nominal GDP estimates are commonly used to determine the economic performance of a whole country or region, and to make international comparisons.”

Here are the three WawamuStats GDP videos I think you will enjoy.

This dynamic visualization shows how Asian economies are expected to grow and eventually dominate the world economy, with China’s economy, and later India’s economy, exceeding the US economy in terms of GDP, and several European economies dropping out of the top 10 ranking. While the specific national GDP values are only projections, the macro trends, with a strong shift toward Asian economies, probably is correct.

You can find additional dynamic video timelines on the WawamuStats Facebook page here:

Thanks to Lyncean member Mike Spaeth for bringing the WawamuStats dynamic visualizations to my attention. 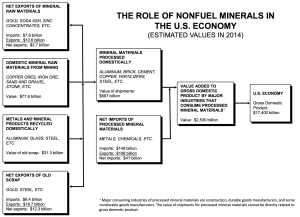 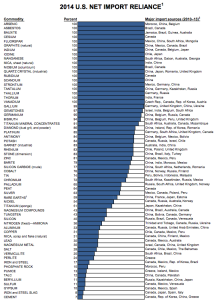 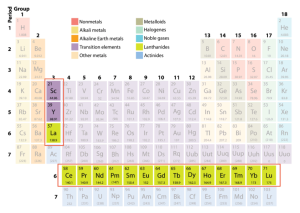 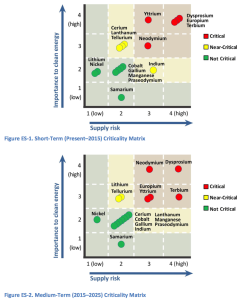 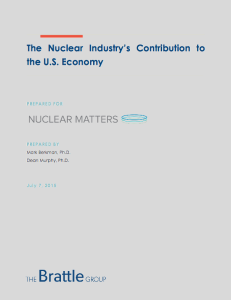 You can access World Bank Open Data at the following link:

Your basic navigation options are shown below:

As an example of what you can find, I selected the “Indicators” tab, then looked under the “Infrastructure” heading and found that data on “Internet users (per 100 people)” were available. These data are viewable in different formats (tabular, map, graph). The map results for the period 2010 – 2014 are shown below: 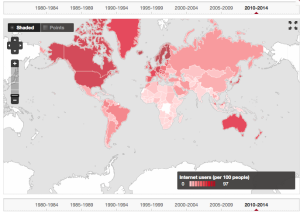 Resolution is at the country level, so the country-wide average values are not representative of usage in remote areas of the country (i.e., the Canadian northern territories).  Nonetheless, the map of the global distribution of Internet users is an interesting result that is quickly available from World Bank data.