JASON and the Naval Research Advisory Committee (NRAC) are both established, independent advisory groups that have long histories of providing important scientific and technical advice to the U.S. government, primarily to Department of Defense (DoD) clients.  The Pentagon cancelled the JASON and NRAC contracts in early 2019.   Immediately, efforts were undertaken on several fronts to attempt to restore funding.   The efforts on behalf of JASON were successful, but NRAC was not so fortunate.

Following is an overview of these two advisory groups and an update on their current status.

JASON is an independent advisory panel of elite scientists that was created in 1960 to address a wide range of scientific and technical issues, primarily for the U.S. military. Originally, the JASON panel had about 20 members, known informally as Jasons, increasing to about 40 members by the 1970s.  JASON maintains its independence by requiring that new members be selected by its existing members rather than by external sponsors.

JASON is a very controversial organization with a very low public profile.  For a good introduction to JASON, I recommend Ann Finkbeiner’s 2006 book, “The Jasons: The Secret History of Science’s Postwar Elite,”  which is available from Amazon and other booksellers. You can watch an hour-long video created by Microsoft Research with Ann Finkbeiner providing an excellent narrative overview (no Powerpoint slides) on JASON here:

Ann Finkbeiner notes: “Working in secrecy to solve highly classified problems for the Department of Defense, CIA, and NSA is an elite group of scientific advisors who provide the government with analyses on defense and arms control and they call themselves JASON.  Named for the hero in Jason and the Argonauts, the group grew out of the Manhattan Project and counts as its members scientists such as Freeman Dyson and Murray Gell-Mann.  Of the roughly one hundred Jasons over time, 43 have been elected to the National Academy of Sciences, eight have won MacArthur awards, one a Field’s Medal, and 11 have won Nobel Prizes.  Its members have gathered every summer since 1960, working in absolute secrecy and with unparalleled freedom.  The Jasons’ work poses vital questions: what role should the government play in scientific research? At what point is the inventor accountable for the hazards of the invention?”

Most of the resulting JASON reports are classified.  You’ll find a list of unclassified JASON reports (and links) on the Federation of American Scientists (FAS) website at the following link: https://fas.org/irp/agency/dod/jason/

Since the late 1970s, the JASONs have been assigned tasks and been funded via Indefinite Delivery / Indefinite Quantity (IDIQ) contracts managed by MITRE Corporation.  The Office of the Secretary of Defense (OSD) issued MITRE’s most recent five-year IDIQ contract for managing JASON tasking and funding.   Task Orders are issued under the main IDIQ contract and the actual work is performed according to the individual task orders. The IDIQ contract structure broadly allows government agencies to commission a JASON study and fund it via a new task order.  MITRE’s IDIQ contract expired on 31 March 2019.  A follow-on IDIQ contract was in the works, but OSD cancelled that solicitation on short notice on 28 March 2019.

On 10 April 2019, the article, “Pentagon Cancels Contract for JASON Advisory Panel,” written by Steven Aftergood, was posted on the FAS website at the following link: https://fas.org/blogs/secrecy/2019/04/pentagon-jason/

Aftergood speculated that, “The Pentagon move to cancel the JASON contract appears to be part of a larger trend by federal agencies to limit independent scientific and technical advice.”

See the following documents for more background information on JASON.

At meeting #65 of the Lyncean Group in August 2011, the subject of our presentation was “Experience with the JASONs.”  See more at the following link:  https://lynceans.org/talk-65-82411/

NRAC was established by Congressional legislation in 1946 and provided science and technology advice to the Navy for the past 73 years.  NRAC is the Navy counterpart to the Army Science Board and the Air Force Scientific Advisory Board.  Background information on NRAC is available on the Office of naval Research (ONR) website at the following link: https://www.onr.navy.mil/About-ONR/History/nrac

On 5 April 2019, Steve Aftergood reported that, “This week the U.S. Navy abruptly terminated its own scientific advisory group, depriving the service of a source of internal critique and evaluation.  Now it’s gone.  The decision to disestablish the Committee was announced in a March 29 Federal Register notice.”    The cancellation of the NRAC contract may be part of the apparent trend by federal agencies to limit independent scientific and technical advice.  You can read this report on the FAS website here: https://fas.org/blogs/secrecy/2019/04/nrac-terminated/

In April 2019, the Department of Energy’s National Nuclear Security Administration (NNSA) issued a notice of intent (NOI) for a sole-source contract to provide funding for JASON through at least January 2020. You’ll find this NOI here: https://fas.org/irp/agency/dod/jason/nnsa-jason-noi.pdf

On 28 June 2019, Ann Finkbeiner posted an article entitled, “Jason—a secretive group of Cold War science advisers—is fighting to survive in the 21st century,” on the Science website at the following link: https://www.sciencemag.org/news/2019/06/jason-secretive-group-cold-war-science-advisers-fighting-survive-21st-century

This article provides a good overview of the history of JASON and offers the following view on future funding for the group.

“What happens when Jason’s contract with NNSA expires in 2020 is unclear. One possibility is yet another home within DOD: This month, the U.S. House of Representatives added a line to DOD’s preliminary budget directing the Office of the Under Secretary of Defense for Acquisition and Sustainment to pick up Jason’s contract.”

On 11 December 2019, Steve Aftergood reported that Congress, via the National Defense Authorization Act for 2020, has directed the Department of Defense to reach an “arrangement with the JASON scientific advisory group to conduct national security studies and analyses.”  Aftergood identified the following specific JASON studies:

You can read this brief report on the FAS website at the following link: https://fas.org/blogs/secrecy/2019/12/dod-jason

On 11 May 2020, Jeffrey Mervis, writing for the Science.mag website, reported that JASON was engaged in a pro bono study, led by Massachusetts Institute of Technology (MIT) physicist Peter Fisher, of how to reopen university laboratories safely in the midst of the corona virus pandemic.  The results of this JASON study are expected in June 2020 and should be a useful resource for university officials and government agencies that are now drafting their own policies on reopening.

You can read the complete article here:  https://www.sciencemag.org/news/2020/05/secretive-jasons-have-advised-united-states-nuclear-war-next-how-reopen-labs-pandemic

It’s hard to believe that this matter has become a significant issue in modern scientific research, but I’m sure that we’ve all read about questionable research practices, false claims in research papers, retraction of some papers, and notable researchers being exposed for their lack of scientific integrity. It appears that political bias and pressure  play roles in challenging integrity in some research.

The National Academies has just published a consensus study report entitled (you guessed it), “Fostering Integrity in Research.” 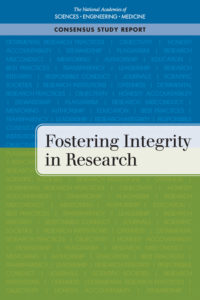 In their abstract, the National Academies authors explain:

“The integrity of knowledge that emerges from research is based on individual and collective adherence to core values of objectivity, honesty, openness, fairness, accountability, and stewardship. Integrity in science means that the organizations in which research is conducted encourage those involved to exemplify these values in every step of the research process. Understanding the dynamics that support – or distort – practices that uphold the integrity of research by all participants ensures that the research enterprise advances knowledge.”

If you have a MyNAP account (it’s free), you can download a pdf copy of this report for free from the National Academies Press (NAP) website at the following link:

This report is a follow-on to a related two-volume, 1992 National Academies report entitled, “Responsible Science: Ensuring the Integrity of the Research Process,” which you can download here:

In our world where “fake news” is becoming commonplace, responsible researchers must maintain their scientific integrity as they face various pressures to do otherwise. 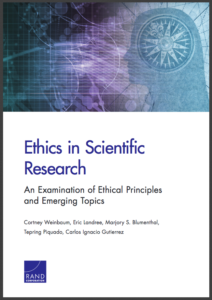 In their report abstract, RAND reported:

“The authors reviewed literature from across scientific disciplines and conducted interviews with experts in the United States, Europe, and China. The research had two motivations: (1) to inform researchers and sponsors who engage in research in emerging scientific disciplines and who may face new ethical challenges, and (2) to inform research sponsors — including government officials — who wish to encourage ethical research without unintentionally encouraging researchers to pursue their research in other jurisdictions.

This analysis led to an understanding of which ethics are common across disciplines, how these ethics might vary geographically, and how emerging topics are shaping future ethics. The authors focused on the ethics of scientific research and how the research is conducted, rather than on how the research is applied. This distinction excluded from this research an analysis of so-called “dual-use” applications for military purposes.”

You can download a free pdf copy of this report from the RAND website at the following link: