Thanks to Mike Spaeth for sending me a very interesting video that demonstratres the great difficulty a person encounters trying to ride a bicycle that has one significant modification as shown below: gears were inserted to reverse the mechanical connection between the handlebars and the front wheel. 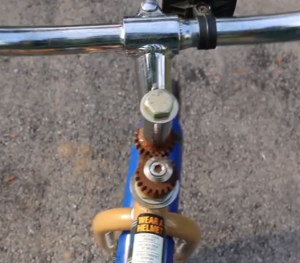 Turn the handlebars right and the front wheel turns left. 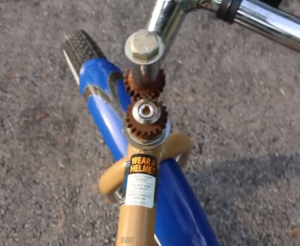 Turn the handlebars left and the front wheel turns right. 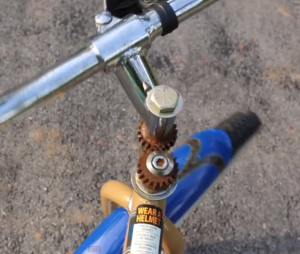 This sounds simple enough because the mechanics of the modifications are easily understandable, but remarkably, the modified bicycle proved to be unrideable. The point of the video is that the brain has developed an understanding of how to control a conventional bicycle and the process of learning how to control the modified bicycle is much more difficult than you might expect. The adult author of the video said it took him 8 months of practice to be able to ride the modified bicycle successfully, initially with a great deal of concentration. It took his young son only 2 weeks to accomplish the same thing, perhaps demonstrating the neuroplasticity of a child’s brain.

After becoming proficient on the modified bicycle, going back and riding a conventional bicycle also proved to be difficult for the adult author. The understanding of the applicable control laws for the conventional bicycle was temporarily lost, but finally “clicked” back into place after a bit of practice. This experiment demonstrated that the brain does not make the transition between very different control laws like flipping a switch, at least in the case of this bicycle modification. This also may explain how I wound up on the wrong side of the road in Australia.

You can see this interesting video at the following link: