The birthdate of Isaac Asimov, a famous author best known for his science fiction novels and short stories, is sometime between 4 October 1919 and 2 January 1920.  He was born in Petrovichi in Smolensk Oblast, RSFSR (now Russia), west of Moscow, near the border with Belarus, and he died in New York City on 6 April 1992.  He traditionally celebrated his birthday on 2 January, giving enough reason to mark the centennial of his birth on 2 January 2020.

I was an avid reader of science fiction during the time when Isaac Asimov’s novels on robots, the Foundation and the Galactic Empire were first being published.  I  was hooked with the first novel I read,  Pebble in the Sky, and waited with anticipation until each new book became available in paperback.

You may remember that Asimov created the basic three laws of robotics:

These laws were woven into the storyline of many of his books.

Unless you already have your favorite Asimov volumes on your bookshelf, I suggest that you visit the Internet Archive and the Open Library, which provide free access to many Asimov books as well as a vast range of other books and resources.  You can set up a free account on the Internet Archive homepage here:

In the Open Library, a search for “Isaac Asimov” will take you here:

Now you’re almost ready to look for an available book in the Open Library and start reading.  Note that you may be in a waitlist, because library rules for e-books limit the number of copies that can be checked out at any one time.

If you choose to read about robots, the Foundation and the Galactic Empire (books written over a 52 year period from 1940 to 1992), consider Asimov’s own recommendations regarding the chronological order of the stories, in terms of future history:

The above list is adapted and updated from the Author’s notes in Prelude to Foundation to account for books published after 1988.

I also recommend that you take the time to watch the following on YouTube:

Thank you, Isaac Asimov, for inspiring generations of readers, and generations yet to come.

George Orwell’s novel Nineteen Eighty-Four was published 70 years ago, on 8 June 1949. Together with his political allegory Animal Farm published in 1945, Nineteen Eighty-Four brought Orwell worldwide fame. As I hope you know, Nineteen Eighty-Four describes a dystopian future occurring in 1984 (now 35 years in our past) in which a totalitarian government imposes repressive regimentation on all persons and behaviors through prescriptive laws, propaganda, manipulation of history, and omnipresent surveillance.  Fortunately for us, the real year 1984 fared much better.  However, Orwell’s vision of the future, as expressed in this novel, still may be a timely and cautionary tale of a future yet to come.

You can read Nineteen Eighty-Four chapter-by-chapter online on The Complete Works of George Orwell website at the following link, which also contains other Orwell novels.

You also can read Nineteen Eighty-Four as one file on the Project Gutenberg Australia website at the following link:

Here, it’s easy to search the whole novel for key words and phrases, like “Though Police,” “Big Brother,” “Ministry of Truth,” “thoughtcrime,” “crimethink,” and “face crime,” and see how they are used in context.

Orwell was right about the concept that an entire population can be kept under constant surveillance.  However, he probably didn’t appreciate the commercial value of such surveillance and that people voluntarily would surrender so much information into an insecure (online) environment, thereby making it easy for agents to legally or illicitly collect and process the information they want. Today, it’s hard to know if Big Brother is the government or anonymous aggregations of commercial firms seeking to derive value from your data and influence your behavior.

With the increasing polarization in our society today, it seems to me that we are entering more precarious times, where our own poorly defined terms, such as “politically correct” and “hate speech,” are becoming tools to stifle alternative views and legitimate dissent.

I remember in the late 1970s when I first read the words “politically correct” in Jim Holman’s local San Diego newspaper, Reader. My first reaction to this poorly defined term was that it will lead to no good.  Since then, use of  “politically correct” has grown dramatically, as shown in the following Google Ngram.  While I agree that political correctness has its place in a polite society, the muddled jargon of political correctness easily can becomes a means to obfuscate a subject under discussion.

In the past two decades, use of the term “hate speech” has become commonplace, as shown in the following Google Ngram. While laws have been written to define and combat actual “hate speech,” this term is easily misused to stifle dissent, even legitimate dissent, by forcefully mischaracterizing one side of a discussion that never was intended to be hateful.  Our ability to hold opposing views without being mischaracterized as a “hater” is being eroded in our increasingly polarized society, where self-appointed (and often anonymous) Thought Police are using social media (What an oxymoron!) to punish the perceived offenders. Such “policing” is not centralized, as in Orwell’s novel, but its effects can be very damaging to its victims.

Of course, the word “dissent” has been in common usage for a very long time and is a fundamental right of American citizens.

Seventy years after first being published, Orwell’s novel Nineteen Eighty-Four still stands as a relevant cautionary tale for our own future.  I encourage you to read it again, keep an open mind, and piss off the self-declared Thought Police from time to time.

You’ll find the home page for this fascinating literary contest at the following link:

For a quick background, I’ve excerpted the following description from this website:

“Since 1982 the English Department at San Jose State University has sponsored the Bulwer-Lytton Fiction Contest, a whimsical literary competition that challenges entrants to compose the opening sentence to the worst of all possible novels. The contest (hereafter referred to as the BLFC) was the brainchild (or Rosemary’s baby) of Professor Scott Rice, whose graduate school excavations unearthed the source of the line “It was a dark and stormy night.”

“Conceived to honor the memory of Victorian novelist Edward George Earl Bulwer-Lytton and to encourage unpublished authors who do not have the time to actually write entire books, the contest challenges entrants to compose bad opening sentences to imaginary novels. Bulwer was selected as patron of the competition because he opened his novel “Paul Clifford” (1830) with the immortal words, “It was a dark and stormy night.” Lytton’s sentence actually parodied the line and went on to make a real sentence of it, but he did originate the line “The pen is mightier than the sword,” and the expression “the great unwashed.” His best known work, one on the book shelves of many of our great-grandparents, is “The Last Days of Pompeii” (1834), an historical novel that has been adapted for film multiple times.”

Here are the basic rules, which are described in more detail on the above website:

Judges select an overall winner and runner-up, as well as winners and “dishonorable mentions” in the following categories:

Of course, the contest wouldn’t be complete without the Grand Panjandrum’s Special Award.

Here’s the direct link to the 2016 contest winners:

The overall winner was William “Barry” Brockett from Tallahassee, FL, whose winning entry was the following:

“Even from the hall, the overpowering stench told me the dingy caramel glow in his office would be from a ten-thousand-cigarette layer of nicotine baked on a naked bulb hanging from a frayed wire in the center of a likely cracked and water-stained ceiling, but I was broke, he was cheap, and I had to find her.”

I’m sure you’ll enjoy the other 2016 winners and the “dishonorable mentions.” But don’t stop there. The Bulwer-Lytton archives back to 1999 are available on their website. Unfortunately (or maybe, fortunately) earlier contest results appear to have been lost. The contest organizers remarked:

“At some point in time, we may come across them on a sheaf of forgotten parchment, a roll of dead papyrus, or more likely, a dusty floppy disk. If and when that happy day arrives, we shall post that information on this site post haste. Until then, we share your pain at their absence.”

The website explains how to submit your own entries for the next competition in 2017. Start now and “compose the opening sentence to the worst of all possible novels.” The judges may love it, and you’ll earn some minor bragging rights for your creative writing skills. Your English teacher would be so proud!

“She resolved to end the love affair with Ramon tonight … summarily, like Martha Stewart ripping the sand vein out of a shrimp’s tail … though the term “love affair” now struck her as a ridiculous euphemism … not unlike “sand vein,” which is after all an intestine, not a vein … and that tarry substance inside certainly isn’t sand … and that brought her back to Ramon.”

Dave’s September 2015 talk was entitled, “The Science of TV’s ‘The Big Bang Theory’: Explanations Even Penny Would Understand.”

You’ll also find winning entries since 2016 listed under the “Winning Entries” tab on the Bulwer-Lytton website. 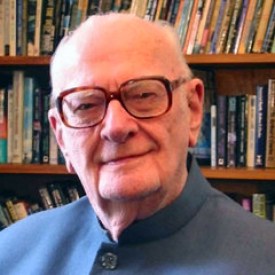