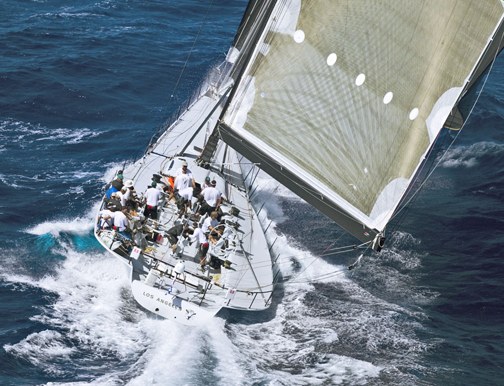 The LA-Honolulu Transpac is a premier sailboat race of almost 2,500 miles from Long Beach to Honolulu. The yachts in the race run from 35 ft to over 100 ft in length and can take 6-14 days to finish, depending on boat speed and the weather. Speeds on the largest yachts exceed 30 knots. Excellent navigation and crew work over an extended period are essential to a winning performance.

Planning for an open ocean race of this length generally begins over a year in advance.  My first conversation about chartering a boat and doing the race occurred only 4 short months before it began.  During those 4 months, the boat, PYEWACKET, an Andrews 70 with an international resume, was chartered from Roy Disney, Walt Disney’s nephew.  A crew of 10 was selected, and in the short time we had, we worked on personal fitness, practiced on the chartered yacht, attended navigation and safety seminars, conducted qualifying races and safety demonstrations, and inspected the sails, rigging, safety and other equipment needed for the race. Most of the crews of the large yachts are composed of professional sailors hired by the owner.  Our crew consisted of 8 amateurs and two professionals. All of our hard work paid off: we finished 2nd out of a fleet of 61.