Twenty-three teams competed in the 2015 DARPA Robotics Challenge, which was held June 5-6, 2015, at Fairplex in Pomona, CA.  The winner was Team KAIST from the Republic of Korea, and its robot DRC-Hubo. 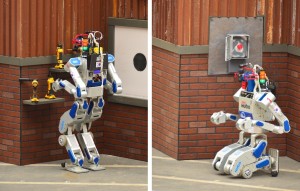 An assessment of how DRC-Hubo won the 2015 DARPA Robotics Challenge appears on the IEEE Spectrum website, which you can read at the following link:

The results of the 2015 DARPA Robotics Challenge are listed in the following table:

You can view information on all of these teams and their robots on the DARPA website at the following link:

The author, Erik Sofge, noted that, in 2012, DARPA originally proposed the following tasks for the DRC:

At the 2013 DRC Trials in Miami, poor robot performance indicated the need to redefine most of these tasks. For the DRC Finals, all but one of the eight tasks had been greatly simplified. In his article, Eric Sofge provides a task-by-task breakdown of the DRC Finals, which I think you will find quite revealing.

Eric Sofge suggests a logical follow-on to DRC, which would be another competition with the following attributes:

It’s interesting to note that the NASA / JPL robot Valkyrie, which earned zero points in the 2013 DRC Trials, did not compete in the 2015 DRC Finals. However, Valkyrie was present at the DRC Finals to promote the new NASA Space Robotics Challenge (SRC). Valkyrie (aka R5) and another NASA robot, Robonaut 2, are being groomed to support space exploration. See my 6 July 2016 post for more information on the NASA SRC.