After designing, developing, and manufacturing a new commercial airliner, I’m sure the airframe manufacturer has a big celebration on the occasion of the first flight. The ensuing flight test and ground static test programs are intended to validate the design, operating envelope, and maintenance practices and satisfy these and other requirements of the national certifying body, which in the U.S. is the Federal Aviation Administration (FAA). Meanwhile, airlines that have ordered the new aircraft are planning for its timely delivery and introduction into scheduled revenue service.

The time between first flight and first delivery of a new commercial airliner is not a set period of time. As you can see in the following chart, which was prepared by Brian Bostick (http://aviationweek.com/thingswithwings), there is great variability in the time it takes to get an airliner certified and delivered. 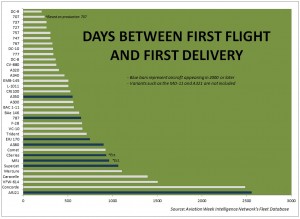 The record for the longest certification period goes to the Chinese Comac ARJ21 twin-jet airliner, which is the first indigenous airliner produced in China. The first ARJ21 was delivered to a Chinese airline in November 2015. The ARJ is based on the DC-9 and reuses tooling provided by McDonnell Douglas for the licensed production of the MD-80 (a DC-9 variant) in China. I suspect that the very long certification period is a measure of the difficulty in establishing the complete aeronautical infrastructure needed to deliver an indigenous commercial airliner with an indigenous jet engine.

In the chart, compare the certification times for the following similar commercial airliners:

Time is money, so there is tremendous economic value in minimizing the time between first flight and first delivery. The first 16 aircraft at the top of the chart all enjoyed relatively short certification periods. This group, which includes many aircraft that appeared in the 1960s – 70, averaged about 400 days between first flight and first delivery.

More modern aircraft (blue bars in the chart representing aircraft appearing in 2000 or later) have been averaging about 800 days between first flight and first delivery (excluding ARJ21).