Mechs (aka “mechanicals” and “mechas”) are piloted robots that are distinguished from other piloted vehicles by their humanoid / biomorphic appearance (i.e., they emulate the general shape of humans or other living organisms). Mechs can give the pilot super-human strength, mobility, and access to an array of tools or weapons while providing protection from hazardous environments and combat conditions. Many science fiction novels and movies have employed mechs in various roles. Now, technology has advanced to the point that the first practical mech is under development and entering the piloted test phase.

If you saw the 2009 James Cameron’s movie Avatar, then you have seen the piloted Amplified Mobility Platform (AMP) suit shown below. In the movie, this multi-purpose mech protects the pilot against hazardous environmental conditions while performing a variety of tasks, including heavy lifting and armed combat. The AMP concept, as applied in Avatar, is described in detail at the following link: 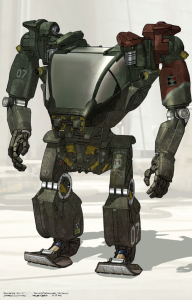 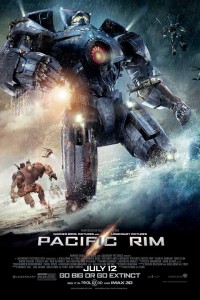 One of the first actual mechs was Kuratas; a rideable, user-operated mech developed in Japan in 2012 by Suidobashi Heavy Industry for fighting mech competitions. Kuratas’ humanoid torso is supported by four legs, each riding on a hydraulically driven wheel. This diesel-powered mech is 4.6 meters (15 feet) tall and weighs about five tons. 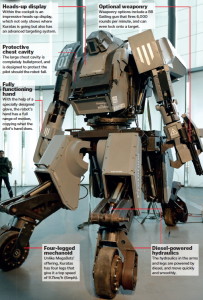 Suidobashi Heavy Industry uses its own proprietary operating system, V-Sido OS. The system software integrates routines for balance and movement, with the goal of optimizing stability and preventing the mech from falling over on uneven surfaces or during combat. While Kuratas is designed for operation by a single pilot, it also can be operated remotely by an internet-enabled phone. 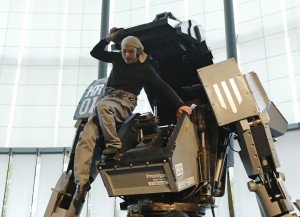 For more information on Kuratas’ design and operation watch the Suidobashi Heavy Industry video at the following link:

It appears that you can buy your own Kuratas on Amazon Japan for  ¥ 120,000,000 (about $1.023 million) plus shipping charges. Here’s the link in case you are interested in buying a Kuratas.

A competitor in the fighting mech arena is the 4.6 meter (15 feet) tall, 5.4 ton MegaBot Mark II built by the American company MegaBots, Inc. The Mark II’s torso is supported by an articulated framework driven by two tank treads that provide a stable base and propulsion. 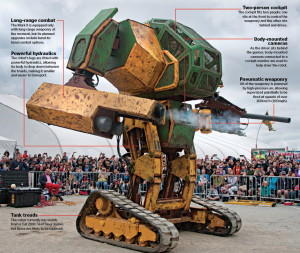 Mark II’s controls are built on the widely-used Robot OS (ROS) operating system, which is described by the OS developers as:

“….a flexible framework for writing robot software. It is a collection of tools, libraries, and conventions that aim to simplify the task of creating complex and robust robot behavior across a wide variety of robotic platforms.”

For more information, visit the ROS website at the following link:

An actual battle between Kuratas and MegaBot Mark II has been proposed (since 2014), but has been delayed many times. On October 2016, MegaBots, Inc. determined that the Mark II was unsafe for hand-to-hand mech fighting and announced it was abandoning this design. Its replacement will be a larger (10 ton) Mk III with a safer cockpit, more powerful engine, higher speed (10 mph) and faster-acting hydraulic valves. Development and operation of MegaBot Mark III is shown in a series of 2016 videos at the following link:

Here’s a look at a MegaBot Mark III torso (attached to a test base instead of the actual base) about to pick up a car during development testing. 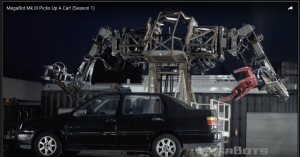 South Korean firm Hankook Mirae Technology has developed a four-meter-tall (13-foot), 1.5 ton, bipedal humanoid mech named Method v2 as a test-bed for various technologies that can be applied and scaled for future operational mechs. Method v2 does not have an internal power source, but instead receives electric power via a tether from an external power source.

“Our robot is the world’s first manned bipedal robot and is built to work in extreme hazardous areas where humans cannot go (unprotected).”

See details on the Hankook Mirae website at the following link:

As is evident in the photos below, Method v2 has more than a passing resemblance the AMP suit in Avatar. 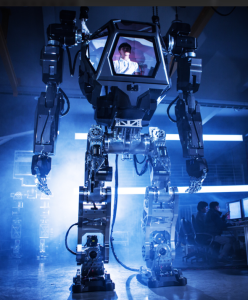 A pilot sitting inside the robot’s torso makes limb movements that are mimicked by the Method v2 control system. 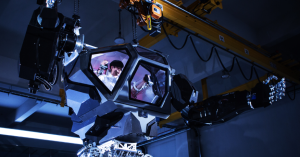 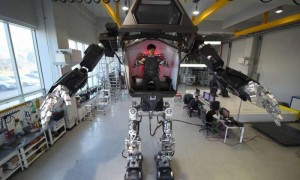 The first piloted operation of the Method v2 mech took place on 27 December 2016. Watch a short video of manned testing and an unmanned walking test at the following link:

You can read more about the test at the following link: