The title of this post also is the title of the first RAND report, SM-11827, which was issued on 5 May 1946 when Project RAND still was part of the Douglas Aircraft Company. The basic concept for an oxygen-alcohol fueled multi-stage world-circling spaceship is shown below. 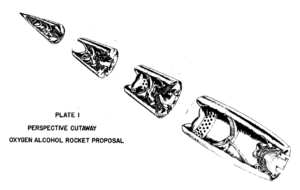 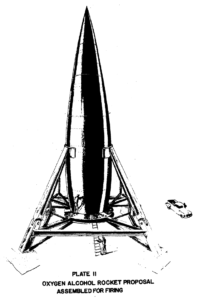 Now, more than 70 years later, it’s very interesting to read this report to gain an appreciation of the state of the art of rocketry in the U.S. in 1946, which already was benefiting from German experience with the V-2 and other rocket programs during WW II.

“More than eleven years before the orbiting of Sputnik, history’s first artificial space satellite, Project RAND — then active within Douglas Aircraft Company’s Engineering Division — released its first report: Preliminary Design of an Experimental World-Circling Spaceship (SM-11827), May 2, 1946. Interest in the feasibility of space satellites had surfaced somewhat earlier in a Navy proposal for an interservice space program (March 1946). Major General Curtis E. LeMay, then Deputy Chief of the Air Staff for Research and Development, considered space operations to be an extension of air operations. He tasked Project RAND to undertake a feasibility study of its own with a three-week deadline. The resulting report arrived two days before a critical review of the subject with the Navy. The central argument turns on the feasibility of such a space vehicle from an engineering standpoint, but alongside the curves and tabulations are visionary statements, such as that by Louis Ridenour on the significance of satellites to man’s store of knowledge, and that of Francis Clauser on the possibility of man in space. But the most riveting observation, one that deserves an honored place in the Central Premonitions Registry, was made by one of the contributors, Jimmy Lipp (head of Project RAND’s Missile Division), in a follow-on paper nine months later: ‘Since mastery of the elements is a reliable index of material progress, the nation which first makes significant achievements in space travel will be acknowledged as the world leader in both military and scientific techniques. To visualize the impact on the world, one can imagine the consternation and admiration that would be felt here if the United States were to discover suddenly that some other nation had already put up a successful satellite.’”

You can buy the book from several on-line sellers or directly from RAND. However you also can download the complete report for free in three pdf files that you’ll find on the RAND website at the following link: