The Teledyne Ryan Aeronautical (TRA) Model 154 Firefly, designated AQM-91 by the U.S. Air Force and codenamed Compass Arrow, was a secret unmanned spy plane that was an early adopter of stealth technology. Ryan won the competition with North American Aviation (now part of Boeing) in June 1966 and Model 154 made its first flight in September 1968. It was unceremoniously revealed to the public after an in-flight failure followed by a parachute landing into a picnic area in in an unrestricted part of Los Alamos National Laboratory, New Mexico in August 1969.

The 5,400 pound Model 154 was designed to be carried under-wing and air-launched from a modified C-130 cargo plane and then fly at subsonic speed at an altitude about 78,000 ft. over a range of more than 2,000 miles. The intended mission of the Model 154 was to provide surveillance deep into China.  For this mission, the aircraft was equipped with an Itek KA-80A Optical Bar Panoramic Camera to provide both broad area coverage and high resolution photography over long distances (coverage of an area 1,720 miles long and 43 miles wide). This same camera is used in the U-2 spy plane, and was the basis for the Apollo Panoramic Camera used to survey the Moon’s surface from lunar orbit in the late 1960s.

Stealth features of the Model 154 included: (1) significant use of plastic composites instead of metal, (2) radar absorbent material (RAM) triangular inserts in the wing and tail leading and trailing edges, (3) location of engine inlet and exhaust on the top of the fuselage to reduce radar and infrared signatures when viewed from below, (4) inward-canted vertical fins to reduce radar reflections and help conceal the engine exhaust stream, (5) hot engine exhaust gas mixed with cool air to reduce infrared signature, and (6) likely use of RAM on the engine inlet structure. You can see several of these features in the following Ryan photo of a sub-scale radar cross-section model. 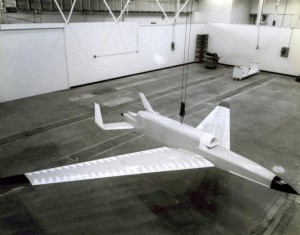 A total of 28 Model 154s were built, including 20 production machines. The program was cancelled in 1972 after President Nixon visited China and promised to end aircraft reconnaissance overflights of Chinese territory. All Model 154s were put into storage in 1973 and subsequently were scrapped. Total program cost was almost $2 billion in then-year dollars, or about $65 million per unit. This was an early indicator of the rather high cost of developing and deploying a small fleet of stealth aircraft. In current-year dollars, the cost per unit would be almost seven times higher.

Additional information is available in the National Museum of the U.S. Air Force fact sheet for the AQM-91 (Model 154), which you will find at the following link:

One Model 154 is in display in the Cold War gallery of the National Museum of the U.S. Air Force, hanging high above the main floor, painted black on all visible lower surfaces, and suspended from the black roof structure.  This aircraft is easy to miss during a visit to the museum. Compass Arrow remains a stealthy aircraft, even today. 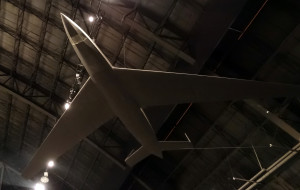 You can find even more information on the Model 154 and some other cold war-era reconnaissance drones at the following link: