The P-47 Thunderbolt, built by Republic Aviation, was a powerful WW II fighter that was capable of operating effectively at high-altitude as a long-range bomber escort or at low altitude as a fighter bomber. That tactical flexibility was enabled by its turbocharged Pratt & Whitney Double Wasp R-2800, two-row, 18-cylinder radial engine. A representative P-47D is shown in the following photo. 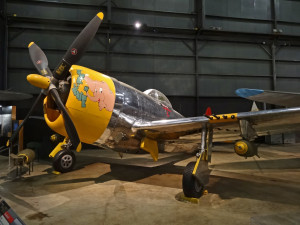 Basic specifications for a P-47D are listed below (Source: National Museum of the USAF):

The basic engine installation can be seen in the following illustration of a P-47 without its engine cowling: 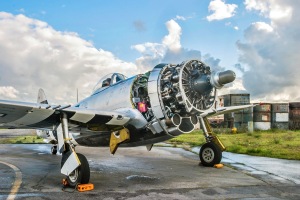 The R-2800 engine is turbocharged, with the turbocharger, intercooler, and related subsystems all located behind the pilot. There is a lot of intake ductwork needed to get ambient air routed from the main air duct intake immediately under the engine to the turbocharger and intercooler and then back to the carburetors on the engine.

Similarly, there is a lot of exhaust system ductwork needed to collect the exhaust from 18 cylinders into tailpipes and then route it back to drive the turbine section of the turbocharger and then be discharged via the main exhaust on the bottom of the P-47 fuselage.

These basic intake air and exhaust flow paths are shown in the following diagram. 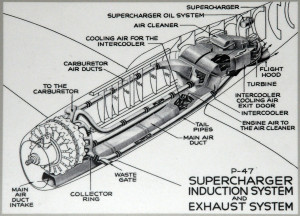 Source: National Museum of the USAF

While visiting the National Museum of WW II Aviation in Colorado Springs, CO, I saw the complete P-47 powertrain shown in the following photo. The engine is at the extreme left, the turbocharger is at the extreme right, and the intercooler is at the point where the carburetor air duct (top) converges in a “V” with the main air duct (bottom). The darker exhaust tailpipes flank the main air duct along the bottom of the powerplant. 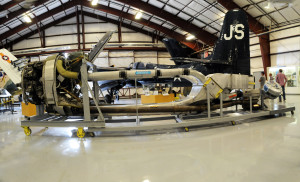 From the front, the Pratt & Whitney R-2800 dominates the view in the following photo. The main air duct intake is visible under the engine. The carburetor air duct (top), and the main air duct and darker exhaust tailpipe (bottom) are visible to the left, behind the engine. 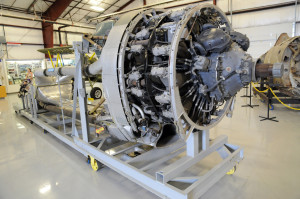 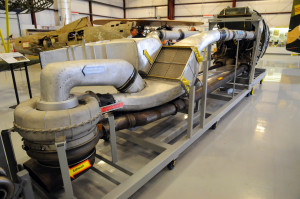 The following photo shows more clearly the connection of the exhaust tailpipes to the turbine section of the turbocharger and the exhaust point from the turbine section (beneath the P-47’s fuselage). Also shown is the intercooler, which is a heat exchanger that receives cool ambient air from the main air intake duct and warm, compressed air from the turbocharger’s compressor discharge (red arrow). After cooling the compressed air headed for the carburetors, the intercooler exhausts through rectangular ducts on the sides of the P-47 (yellow arrow). 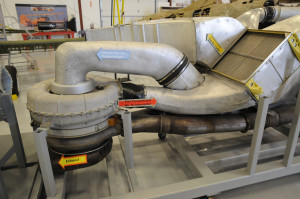 A better view of the intercooler exhaust duct (one of two) is shown in the following photo. 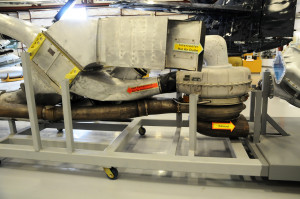 So there you have it. While the P-47 looks bulky , this is largely due to the use of a big radial engine plus all of the ductwork, intercooler and turbocharger hardware packaged inside the fuselage.