On 9 January 2007, Steve Jobs introduced the iPhone at Macworld in San Francisco, and the smart phone revolution moved into high gear. 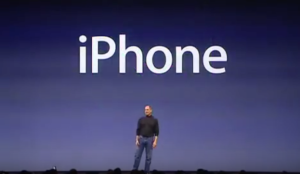 Fortunately the first iPhone image he showed during this product introduction was a joke. 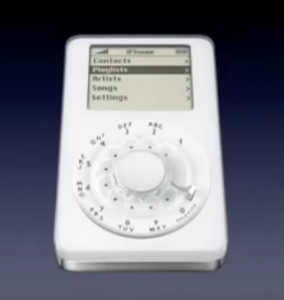 Not the 2007 original iPhone. Source: Apple

In the product introduction, Steve Jobs described the iPhone as:

You can watch a short (10 minute) video of the historic iPhone product introduction at the following link:

A longer version (51 minutes) with technical details about the original iPhone is at the following link:

These videos are good reminders of the scope of the innovations in the original iPhone. 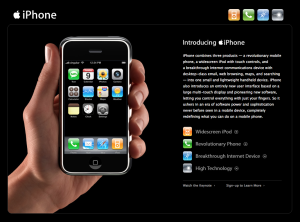 The original iPhone was a 2G device. The original applications included IMAP/POP e-mail, SMS messaging, iTunes, Google Maps, Photos, Calendar and Widgets (weather and stocks). The Apple App Store did not yet exist.

iTunes and the App Store are two factors that contributed to the great success of the iPhone. The iPhone App Store opened on 10 July 2008, via an update to iTunes. The App Store allowed Apple to completely control third-party apps for the first time. On 11 July 2008, the iPhone 3G was launched and came pre-loaded with iOS 2.0.1 with App Store support. Now users could personalize the capabilities of their iPhones in a way that was not available from other mobile phone suppliers.

You’ll find a good visual history of the 10-year evolution of the iPhone on The Verge website at the following link:

What mobile phone were you using 10 years ago? I had a Blackberry, which was fine for basic e-mail, terrible for internet access / browsing, and useless for applications. From today’s perspective, 10 years ago, the world was in the Dark Ages of mobile communications. With 5G mobile communications coming soon, it will be interesting to see how our perspective changes just a few years from now.