Proliferation of nuclear technology has been the subject of many studies for more than a half century.   The latest assessment is provided in the subject document, “Underestimated: Our Not So Peaceful Nuclear Future,” by Henry D. Sokolsky, published in 2015 by the Nonproliferation Policy Education Center (NPEC). 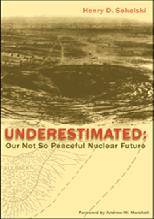 The author describes the scope of this document as follows:

“First, it reviews the key popular views on nuclear proliferation. Second, it considers how much worse matters might get if states continue with relatively loose nuclear constraints on civilian and military nuclear activities. Finally, it offers several policy recommendations.”

In this report, Henry Sokolsky shows how simple life was in 1962: 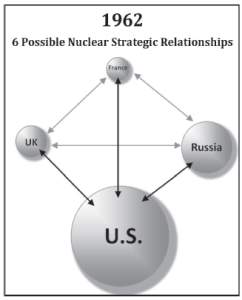 By 2001, the relationships had become more complex, as shown by the author in the following figure: 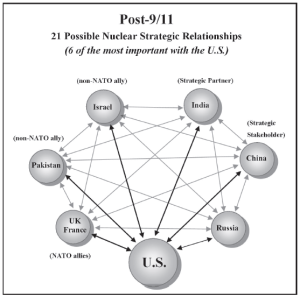 The author also shows how relationships are becoming more complex as nuclear weapons technology has proliferated to North Korea (DPRK) and potentially will proliferate to other nations aspiring to become nuclear powers.

With 181 footnotes interspersed with the text, it is not easy reading, but I think you will find that it is worth your time.

Forty years ago, in 1975 (and updated in 1976), a similar assessment was presented in a report entitled, “Moving Toward Life in a Nuclear Armed Crowd?,” by Albert Wohlstetter and a team from Pan Heuristics, a division of Science Applications, Inc. [SAI, later Science Applications Internal Corporation (SAIC)]. This report was prepared for the U.S. Arms Control and Disarmament Agency (ACDA) and was intended to define the then current trends in the spread of nuclear technology and analyze the political, economic and military problems that these trends posed for U.S. and international policy makers.

The “Nuclear Armed Crowd” report has extensive data tables and charts that are particularly interesting in hindsight. This report was written before the first nuclear tests by India and Pakistan, but these nations were assessed as proliferation risks in this report. Notably absent in this report is North Korea (DPRK), which used a clandestine nuclear program to develop it’s indigenous (but likely with the help of other nations) nuclear weapons capability.

These two reports are not bedtime reading. You will not sleep better after having read them. However, I think the 40 years between these two reports will provide you with valuable insights to the great difficulties of controlling the proliferation of nuclear weapons technology.