No!  This is not a story about UFOs.  On 19 October 2017, astronomers using the Panoramic Survey Telescope and Rapid Response System 1 (Pan-STARRS1)in Hawaii made the first detection of an interstellar object passing through our solar system.  PanSTARRS 1 uses a Moving Object Processing System (MOPS) that is designed to detect fast moving objects in the vicinity of the Earth as well as those moving as slowly as the fastest proper motion stars.  The original goal of  the PanSTARRS project, which began observations in 2007, was to detect objects 100 times fainter than previous sky surveys, including 99% of the asteroids 300 meters (1,309 feet) or larger that come near Earth’s orbit.

NASA reported: “Rob Weryk, a postdoctoral researcher at the University of Hawaii Institute for Astronomy, was first to identify the moving object and submit it to the Minor Planet Center. Weryk subsequently searched the Pan-STARRS image archive and found it also was in images taken the previous night, but was not initially identified by the moving object processing.” 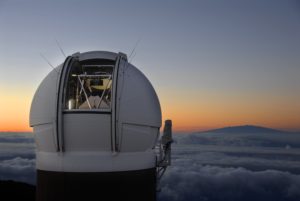 The PanSTARRS1 MOPS is described in more detail here.

The interstellar object discovered by Pan-STARRS1 was designated Asteroid  1I/2017 U1, and later was named Oumuamua, which means “a messenger from afar arriving first” in Hawaiian.  The red-hued object has a highly-elongated  shape (cigar-shaped) with a length of about a quarter mile (1,320 feet, 402 meters) and a diameter of  about 120 feet (40 meters).  Oumuamua was unlike any asteroid or comet previously observed in our solar system. 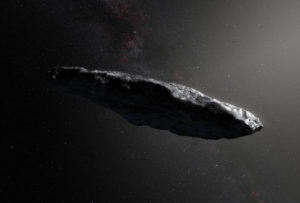 Before its detection by PanSTARRS1, Oumuamua had entered our solar system and made its closest approach to the Sun on 19 September 2017, reaching a speed of about 196,000 mph (315,400 km/h).  From analysis of its trajectory, astronomers determined that Oumuamua most likely came from outside our solar system.  On its outbound trajectory, it was moving fast enough to escape the Sun’s gravitational field and break free of the solar system, never to return. 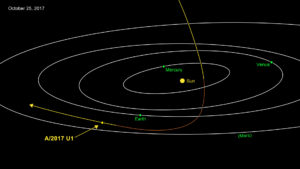 You can read the ESA report here:

The Breakthrough Listen initiative reported that the Green Bank Telescope in West Virginia detected no evidence of artificial signals emanating from the object.

To the disappointment of science fiction fans, all observations were consistent with Oumuamua being a natural object, and not a derelict spaceship, like the Battlestar Galactica. 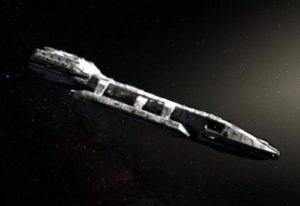 David  Clery’s 21 May 2018 article, “This asteroid came from another solar system—and it’s here to stay,” describes the 2014 discovery and recent analysis of an object in our solar that is in a retrograde, heliocentric orbit at approximately the distance of Jupiter from the Sun (483.8 million miles / 778.6 million km).  The asteroid, identified as 2015 BZ509, is traveling around our solar system in the opposite directions of almost everything else in an orbit with unusual elongation and inclination to the plane of the solar system.  The recent analysis indicates that this is a stable orbit, and not a fly-by trajectory through our solar system like the brief visit of Oumuamua.

You can read David Clery’s article on the Science website here:

The original paper by F. Namouni and M H M Morais, “An interstellar origin for Jupiter’s retrograde co-orbital asteroid,”was published on 21 May 2018 in the Monthly Notices of the Royal Astronomical Society.  The paper describes the analysis of the orbital parameters that that led to the conclusion the asteroid 2015 BZ509 was in a stable orbit.  The authors reported:

“Asteroid (514107) 2015 BZ509 was discovered recently in Jupiter’s co-orbital region with a retrograde motion around the Sun. The known chaotic dynamics of the outer Solar system have so far precluded the identification of its origin. Here, we perform a high-resolution statistical search for stable orbits and show that asteroid (514107) 2015 BZ509 has been in its current orbital state since the formation of the Solar system. This result indicates that (514107) 2015 BZ509 was captured from the interstellar medium 4.5 billion years in the past as planet formation models cannot produce such a primordial large-inclination orbit with the planets on nearly coplanar orbits interacting with a coplanar debris disc that must produce the low-inclination small-body reservoirs of the Solar system such as the asteroid and Kuiper belts. This result also implies that more extrasolar asteroids are currently present in the Solar system on nearly polar orbits.”

You can read the full paper here.

You can view a short animation created by the Large Binocular Telescope Observatory to illustrate the dynamics of the unusual retrograde orbit of 2015 BZ509 here.

It’s an intriguing prospect that there are more extrasolar objects in stable orbits around our Sun.  Could one of them be the elusive Planet 9?  For an update on the search for Planet 9, see the 21 May 2018 article by Elizabeth Howell, “Weird Space Rock Provides More Evidence for Mysterious ‘Planet Nine’,” which is on the Space.com website at the following link: 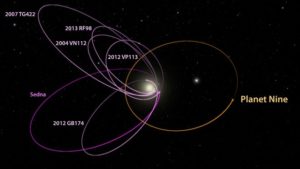