The National Snow and Ice Data Center in Boulder, CO, announced on 19 March 2015 that the 2014-2015 Arctic sea ice maximum extent was the lowest since record-keeping started in 1979. In addition, sea ice likely hit its maximum extent nearly two weeks earlier than in recent decades, on February 25, 2015. This happened even as unusually cold air and stormy weather occurred across the eastern half of the United States and Canada this past winter. 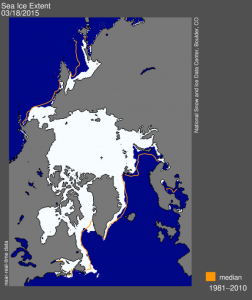 The extent of the Arctic sea ice pack is shown in the following graph from the National Snow and Ice Data Center. The blue line is the current year. 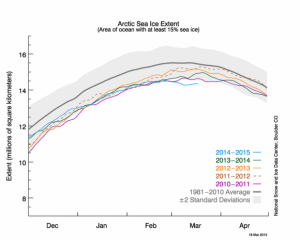