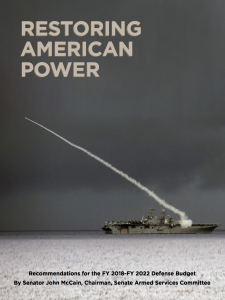 You can download this white paper at the following link:

The white paper starts by describing how the Budget Control Act of 2011 failed to meet its intended goal (reducing the national debt) and led to a long series of budget compromises between Congress and Department of Defense (DoD). These budget compromises, coupled with other factors (i.e., sustained military engagements in the Middle East), have significantly reduced the capacity and readiness of all four branches of the U.S. military. From this low point, the SASC white paper defines a roadmap for starting to rebuild a more balanced military.

If you have read my posts on the Navy’s Littoral Combat Ship (18 December 2016) and the Columbia Class SSBN (13 January 2017), then you should be familiar with issues related to two of the programs addressed in the SASC white paper.