Various reports in 2016 indicate that China has designed and is constructing its first indigenous floating nuclear power plant. This mobile power plant is intended for deployment to remote coastal locations and to islands being developed by China in the South China Sea. According to China General Nuclear Power Corporation (CGN), this floating nuclear power plant is intended to operate as a combined energy supply platform that is capable of delivering electric power, low-temperature process heat, and fresh water as needed by the particular application. Construction of the first unit started in 2015 and is scheduled to be completed in 2018 and operational by 2020. It also has been reported that China Shipbuilding Industry Corporation (CSIC) is building the first floating nuclear power plant, with plans to build a total of 20 for deployment in the South China Sea.

The availability of ample supplies of electric power, low-temperature process heat, and fresh water will enable more rapid development in remote regions, including construction of new infrastructure for harbors, airports, defense and commercial activities such as oil exploration and oil field exploitation and other marine resource development.

CGN reports that the nuclear steam supply system (NSSS) for the first floating nuclear power plant is a single “small modular offshore reactor” ACPR50S, which is a compact two-loop pressurized water reactor (PWR). China’s National Development and Reform Commission (NDRC) recently approved this reactor design as part of the 13th Five-Year Plan for innovative energy technologies. The ACPR50S is rated at 200 MWt, with an electrical output of 60 MWe.

In comparison, the first Russian floating nuclear power plant, Akademik Lomonosov, has 2 x KLT-40S modular PWRs that will provide 70 MWe net electrical output and low-temperature process heat for shore installations. Akademik Lomonosov is schedule for its initial core load at the Baltiisky Zavod shipyard in St. Petersburg, Russia in late 2016. After completing reactor testing, it is expected that Akademik Lomonosov will depart St. Petersburg in October 2017 and be towed along the north coast of Siberia to the Arctic port of Pevek, where it will be moored and connected to the grid.

The physical layout if the ACPR50S is shown below. The major components of the NSSS are the reactor vessel, two steam generators and primary pumps, and one pressurizer. 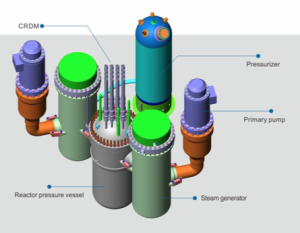 The primary system is housed within a containment structure that is protected against damage from a ship collision (similar to design features in NS Savannah and other early commercial nuclear powered vessels). Active and passive safety systems provide for core and containment cooling during an accident. Severe (beyond design basis) accident mitigation measures include opening safety plugs to submerge the NSSS in seawater to ensure continued core cooling. The physical arrangement of the NSSS within the vessel is shown below. 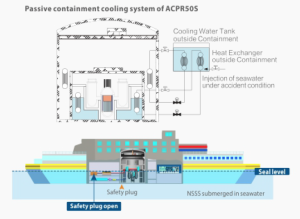 The following figure shows how a floating nuclear power plant might look moored to a pier and delivering electric power, process heat and fresh water to a shore installation. 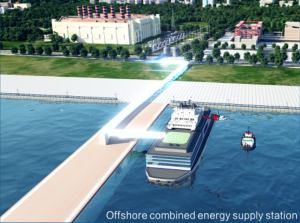 The floating nuclear power plant also could be deployed to support one or many oil drilling platforms as shown below.

A important issue related to China’s deployment of floating nuclear power plants is that they may be deployed to support military development of islands in contested areas of the South China Sea. Time will tell how this scenario plays out.