When I was in South Dakota last week, a major new landmark was created when the 50-foot tall, stainless steel statue named “Dignity” was installed on a bluff overlooking Chamberlin and the Missouri River. The statue of a young Native American woman with a star quilt was commissioned two years ago with a $1 million gift from Norm and Eunabel McKie of Rapid City, SD and was created by Sturgis, SD artist Dale Lamphere. 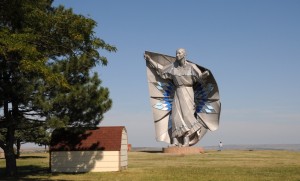 Lamphere is quoted as saying, “My intent for this is to have the sculpture stand as an enduring symbol of our shared belief that we are in a sacred place and that we are all sacred.”

The star quilt is a traditional symbol of honor among the local Native American Lakota people. You’ll find more information on the star quilt and its symbolism at the following link. 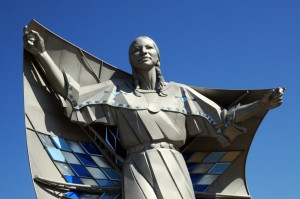 Standing at the top of the bluff leaves the statue exposed to strong winds that are common in the area. To mitigate the effects of the wind, many of the pieces of the diamond quilt are articulated to allow the wind to pass freely through the stainless steel structure of the quilt. 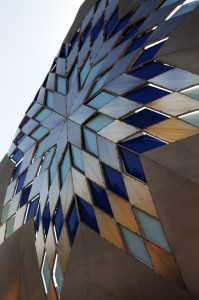 “This is very meaningful for our state. In addition to being the state of Mount Rushmore and the state of Crazy Horse, I believe the prominent location of “Dignity” and the visibility she offers to so many millions of travelers who will be moving up and down Interstate 90, I think we’ll soon become not just the state of those two stone monuments, but also this beautiful metal sculpture as well.”

In the current climate of divisiveness that is permeating this nation, “Dignity” stands as a welcome symbol of hopefulness. Thank you, Norm and Eunabel McKie, for your generous gift to the state of South Dakota and to this great nation of ours.