Utrecht University (Netherlands) Professor Gerard ’t Hooft was the first to propose the “holographic principle,” in which all information about a volume of space can be thought of as being encoded on a lower-dimensional “boundary” of that volume.

Stanford Professor Leonard Susskind was one of the founders of string theory and, in 1995, developed the first string theory interpretation of the holographic principle to black holes. Dr. Susskind’s analysis showed that, consistent with quantum theory, information is not lost when matter falls into a black hole. Instead, it is encoded on a lower-dimensional “boundary” of the black hole, namely the event horizon. 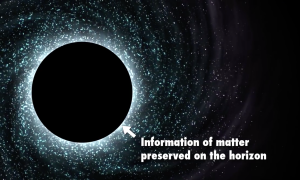 Source: screenshot from video, “Is the Universe a Hologram?”

Extending the holographic principle to the universe as a whole, a lower-dimensional “boundary,” or “cosmic horizon,” around the universe can be thought of as a hologram of the universe. Quantum superposition suggests that this hologram is indistinguishable from the volume of space within the cosmic horizon.

If you have the time, also check out the longer (55:26) video lecture by Dr. Susskind entitled, “Leonard Susskind on The World As Hologram.” In this video, he explains the meaning of “information” and how information on an arbitrary volume of space can be encoded in one less dimension on a surface surrounding the volume.

You also might enjoy the more detailed story in Dr. Susskind’s 2008 book, “The Black Hole War: My Battle with Stephen Hawking to Make the World Safe for Quantum Mechanics.” 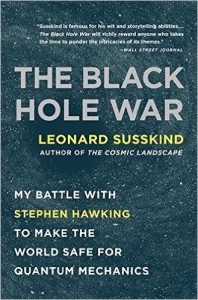 In my 28 September 2016 post, “The Universe is Isotropic,” I reported on a conclusion reached by researchers using data from the Planck spacecraft’s all-sky survey of the cosmic microwave background (CMB). The researchers noted that an anisotropic universe would leave telltale patterns in the CMB. However, these researchers found that the actual CMB shows only random noise and no signs of such patterns.

More recently, a team of researchers from Canada, UK and Italy, also using the Planck spacecraft’s CBM data set, have offered an alternative view that the universe may be a hologram.  You’ll find the abstract for the 27 January 2017 original research paper by N. Afshordi, et al., “From Planck Data to Planck Era: Observational Tests of Holographic Cosmology,” in Physical Review Letters at the following link:

“We test a class of holographic models for the very early Universe against cosmological observations and find that they are competitive to the standard cold dark matter model with a cosmological constant (Λ CDM) of cosmology.”

“Competitive” means that neither model disproves the other.  So, we have a draw.