The International Panel on Fissile Materials (IPFM) was founded in January 2006 as an independent group of arms-control and nonproliferation experts from both nuclear weapon and non-nuclear weapon states. The mission of the IPFM is to analyze the technical basis for practical and achievable policy initiatives to secure, consolidate, and reduce stockpiles of highly enriched uranium (HEU) and plutonium. The home page for IPFM is at the following link:

On the IPFM home page, you will find the following summary information:

Numbers for weapon plutonium for the United States and United Kingdom are based on official data. Most numbers for civilian plutonium are based on declarations submitted to IAEA and reflect the status as of December 31, 2011. Other numbers are non-governmental estimates, often with large uncertainties. HEU amounts are 90% enriched HEU equivalent (with the exception of the number for non-nuclear weapon states). The totals are rounded. See individual country entries for details.

IPFM provides regular assessments of the global nuclear weapon and fissile material stockpiles. Their most recent report, Global Fissile Material Report 2015, was presented at the Non-Proliferation Treaty (NPT) Review Conference at the United Nations on 8 May 2015. 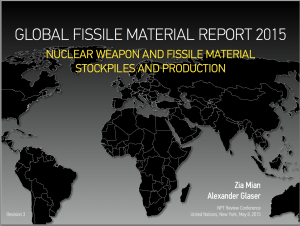 You can download a copy of the 8 May 2015 IPFM presentation at the following link: