The latest U.S. nuclear-powered aircraft carrier, USS Gerald R. Ford (CVN-78), is the first of a new class (the Ford-class) of carriers that is intended to replace the already-retired USS Enterprise (CVN-65) and all 10 of the Nimitz-class carriers (CVN-68 to CVN-77) as they retire after 49 years of service between 2024 to 2058. Newport News Shipbuilding (NNS), a Division of Huntington Ingalls Industries, built all U.S. nuclear-powered aircraft carriers and is the prime contractor for the Ford-class carriers.

USS Gerald R. Ford (CVN-78) was authorized in fiscal year 2008. Actual construction took almost four years from keel laying on 13 November 2009 to launching on 11 October 2013. NNS uses a modular construction process to build major subassemblies in industrial areas adjacent to the drydock and then move each modular unit into the drydock when it is ready to be joined to the rapidly growing structure of the ship. 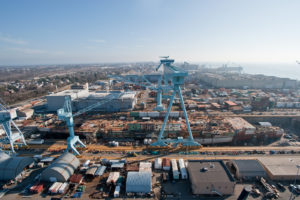 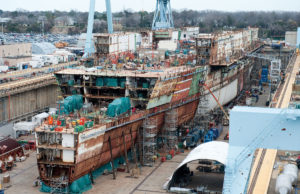 NNS created a short video of an animated 3-D model of CVN-78 showing the arrival and placement of major modules during the 4-year construction period. Highlights are shown in the screenshots below, and the link to the NNS animated video is here: 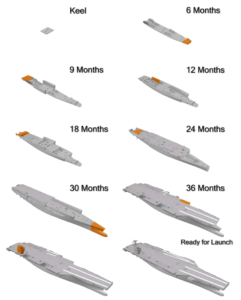 You also can watch a time-lapse video of the 4-year construction process from keel laying to christening here:

In this video, you’ll see major subassemblies, like the entire bow structure and the island superstructure moved into place with heavy-lift cranes. 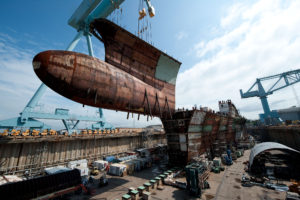 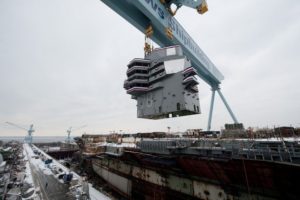 After launching, another 3-1/2 years were required for outfitting and testing the ship dockside, loading the two Bechtel A1B reactors, and then conducting sea trials before the ship was accepted by the Navy and commissioned in July 2017. 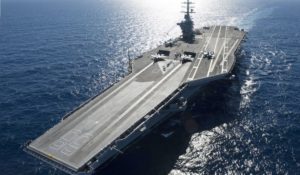 Since commissioning, the Navy has been conducting extensive operational tests all ship systems. Of particular interest are new ElectroMAgnetic Launch System (EMALS) and the electro-mechanical Advanced Arresting Gear (AAG) system that replace the traditional steam catapults and hydraulic arresting gear on Nimitz-class CVNs. If all tests go well, USS Gerald R. Ford is expected to be ready for its first deployment in late 2019 or early 2020.

So, how much did it cost to deliver the USS Gerald R. Ford to the Navy? About $12.9 B in then-year (2008) dollars, according Congressional Research Service (CRS) report RS-20643, “Navy Ford (CVN-78) Class Aircraft Carrier Program: Background and Issues for Congress,” dated 9 August 2017. You can download this CRS report here:

Milestones for the next two Ford-class carriers are summarized below:

To recapitalize the entire fleet of 10 Nimitz-class carriers will cost more than $130 B by the time the last Nimitz-class CVN, USS George H.W. Bush, is scheduled to retire in 2058 and be replaced by a new Ford-class CVN.

The current Congressional mandate is for an 11-ship nuclear-powered aircraft carrier fleet. On 15 December 2016, the Navy presented a new force structure assessment with a goal to increase the U.S. fleet size from the currently authorized limit of 308 vessels to 355 vessels. The Heritage Foundation’s 2017 Index of U.S. Military Strength reported that the Navy’s actual fleet size in early 2017 was 274 vessels, so the challenge of re-building to a 355 ship fleet is much bigger than it may sound, especially when you account for the many planned retirements of aging vessels in the following decades. The Navy’s Force Structure Assessment for a 355-ship fleet includes a requirement for 12 CVNs. The CRS provided their commentary on the 355-ship fleet plans in a report entitled, “Navy Force Structure and Shipbuilding Plans: Background and Issues for Congress,” dated 22 September 2017. You can download that report here:

As the world’s political situation continues to change, there may be reasons to change the type of aircraft carrier that is procured by the Navy. Rand Corporation provided the most recent assessment of this issue in their 2017 report entitled, “ Future Aircraft Carrier Options.” The Assessment Division of the Office of the Chief of Naval Operations sponsored this report. You can download this report at the following link:

So, how many Ford-class aircraft carriers do you think will be built?