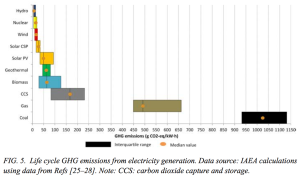 In June 2016, the International Atomic Energy Agency (IAEA) published a report by the Director General entitled, “Nuclear Technology Review 2016,” which highlights notable developments in 2015 in the following segments of the worldwide nuclear industry.

The following chart from the IAEA report shows the age distribution (years of operation) of the worldwide fleet of 441 operating power reactors. The median age of this fleet is about 26 years, and you can see a bow wave of aging nuclear power plants, followed by far fewer younger plants already in operation.

The following chart from the IAEA report shows the number of new plants under construction by region. As of the end of 2015, a total of 68 nuclear power plants were in various stages of their decade-long construction cycles. This chart clearly shows that Western Europe and the Americas are minor players in the construction of new reactors. Most of the new power reactor construction is occurring in Asia and Central / Eastern Europe.

IAEA noted that, “The 21st Conference of the Parties to the United Nations Framework Convention on Climate Change (COP21) resulted in the Paris Agreement that neither identifies nor excludes any particular form of energy.” The Paris Agreement does not discriminate against nuclear power as a means for reaching lower carbon emission goals. In contrast, the U.S. Environmental Protection Agency’s (EPA) euphemistically named “Clean Power Plan” fails to give appropriate credit to nuclear power as a means for utilities and states to reduce the carbon emissions from their portfolio of power plants. (See my 3 July 2015 and 27 November 2015 posts for more on CPP).

“Nuclear power has significantly contributed to climate change mitigation by avoiding nearly 2 billion tonnes (metric tons) of carbon dioxide per year. For nuclear power to help limit global warming to 2o C by 2100, its capacity would need to match the high projection to avoid nearly 6.5 billion tonnes of greenhouse gas emissions by 2050.”

Among the small and medium size reactors (SMRs), IAEA noted that the following three were under construction in 2015: Argentina’s CAREM-25, Russia’s KLT-40S, and China’s HTR-PM. Another dozen SMRs were considered to be in the advanced design stage and potentially deployable in the near-term.

IAEA maintains its Advanced Reactors Information System (ARIS), as I reported in my 13 February 2015 post. This is a very comprehensive source of information on all types of advanced reactors. You can directly access ARIS at the following link:

There’s a lot more information in the IAEA report, including information on fusion, accelerators, research reactors, and industrial and medical applications of nuclear technologies. You can download this IAEA report at the following link:

The International Atomic Energy Agency (IAEA) presents a great volume of information related to the 12 March 2011 Fukushima Daiichi accident and the current status of planning and recovery actions on their website at the following link:

From this web page, you can navigate to many resources, including: Fukushima Daiichi Status Updates, 6 September 2013 – Present. Here is the direct link to the status updates:

The IAEA’s voluminous 2015 report, The Fukushima Daiichi Accident, consists of the Report by the IAEA Director General and five technical volumes. The IAEA states that this report is the result of an extensive international collaborative effort involving five working groups with about 180 experts from 42 Member States with and without nuclear power programs and several international bodies. It provides a description of the accident and its causes, evolution and consequences based on the evaluation of data and information from a large number of sources. 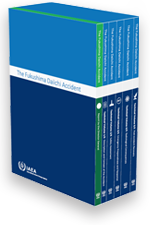 You can download all or part of this report and its technical annexes at the following link to the IAEA website:

There have been many reports on the Fukushima Daiichi accident and lessons learned. A few of the more recent notable documents are identified briefly below along with the web links from which you can download these documents.

A summary of the NRA’s perspective on Fukushima accident and lessons learned is the subject of the March 2014 presentation, “Lessons Learned from the Fukushima Dai-ichi Accident and Responses in New Regulatory Requirements.” You can download this presentation at the following link:

The U.S. Congress asked the National Academy of Sciences to conduct a technical study on lessons learned from the Fukushima Daiichi accident for improving safety and security of commercial nuclear power plants in the U.S. This study was carried out in two phases. The Phase 1 report, Lessons Learned from the Fukushima Nuclear Accident for Improving Safety of U.S. Nuclear Plants, was issued in 2014, and focused on the causes of the Fukushima Daiichi accident and safety-related lessons learned for improving nuclear plant systems, operations, and regulations exclusive of spent fuel storage. 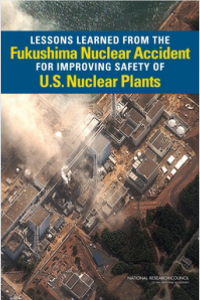 The Phase 2 report, Lessons Learned from the Fukushima Accident for Improving Safety and Security of U.S. Nuclear Plants: Phase 2, recently issued in 2016, focuses on three issues: (1) lessons learned from the accident for nuclear plant security, (2) lessons learned for spent fuel storage, and (3) reevaluation of conclusions from previous Academies studies on spent fuel storage. 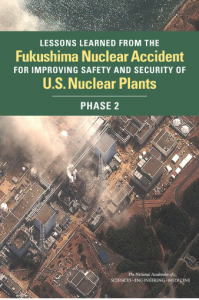 A summary of the U.S. NRC’s response to the Fukushima accident is contained in the May 2014 presentation, “NRC Update, Fukushima Lessons Learned.” You can download this presentation at the following link:

Anyone interested in the current state of advanced nuclear reactor technology should  enjoy a visit to the International Atomic Energy Agency’s ARIS website.  Here’s a link to the ARIS home page:

Check out the “Publications” tab for several IAEA documents that can be downloaded as pdf files for free.  I recommend one document in particular: “Status of Small and Medium Sized Reactor Designs, “ published in September 2011.  This document contains 1-page summaries of 31 small and medium reactor designs from around the world, each with a small color picture.  I was a bit surprised by the very large number of designs and the diverse technologies embodied in these nuclear power plants.  If you’re really interested in how much small and medium reactors have advanced in the past 16 years, you can compare this 2011 document with the similar, but much more detailed, 1995 IAEA document: IAEA-TECDOC-881, “Design and Development of Small and Medium Reactor Systems 1995,” which you can download as a pdf file for free at the following link: