Light exerts a measurable pressure on solid objects. This was demonstrated in 1899 in an experiment conducted by Russian scientist Pyotr Nikolayevich Lebedev. This experiment also demonstrated that the pressure of light is twice as great on a reflective surface than on an absorbent surface. This is the basis for the solar sail concept for spacecraft propulsion. 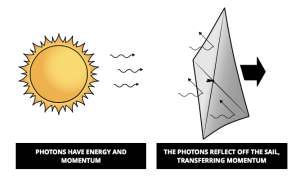 The Japanese IKAROS (Interplanetary Kite-craft Accelerated by Radiation Of the Sun) spacecraft launched on 20 May 2010 is the world’s first spacecraft to use solar sailing as its main propulsion. The square solar sail measured 14.14 meters (46.4 feet) along its edge, with a total area of 200 square meters (2,153 square feet). Thin-film solar cells in the sail provide electric power for spacecraft systems. IKAROS was launched as a secondary payload in conjunction with the Japanese Venus Climate Orbiter. The Japanese Aerospace Exploration Agency (JAXA) claims that acceleration and attitude control of IKAROS were demonstrated during the spacecraft’s flight toward Venus. The total velocity effect over the six-month flight to Venus was reported to be 100 m/s. IKAROS continued into solar orbit while its companion spacecraft entered orbit around Venus.

The Planetary Society conceived and is executing a crowd-funded project called LightSail to continue demonstrating the feasibility of solar sail technology. You can read more at their website:

Packaged into a compact 3-unit “CubeSat” (about the size of a loaf of bread) for launch, the Planetary Society’s first LightSail spacecraft, LightSail A, hitched a ride into orbit on an Air Force Atlas V booster on 20 May 2015. The primary purpose of this first mission is to demonstrate that LightSail can deploy its 32 square meter (344 square foot) reflective Mylar solar sail properly in low Earth orbit.  Following launch and orbital checkout, the sail is expected to be deployed 28 days after launch. Thereafter, atmospheric drag will cause the orbit to decay. 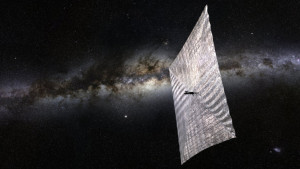 You can read more about the first mission at the following link:

In a second mission planned for 2016, LightSail B will be deployed into a higher orbit with the primary purpose of demonstrating propulsion and maneuverability. LightSail B will be similar to LightSail A, with the addition of a reaction wheel that will be used to control the orientation of the spacecraft relative to the Sun. This feature should allow the spacecraft to tack obliquely relative to the photon stream from the Sun, enabling orbital altitude and/or inclination to be changed.

You can find more information on solar sail physics and use of this technology at the following link:

After launch, the LightSail A spacecraft’s computer was disabled by a software problem and the spacecraft lost communications with Earth.  Reset commands have failed to reboot the computer.  The computer and communications problems occurred before the solar sail was scheduled to be deployed.

The LightSail A computer successfully rebooted and communications between the spacecraft and the ground station have been restored.  The plan is for ground controllers to install a software fix, and then continue the mission.

The Planetary Society announced that the LightSail A spacecraft successfully completed its primary objective of deploying a solar sail in low-Earth orbit. 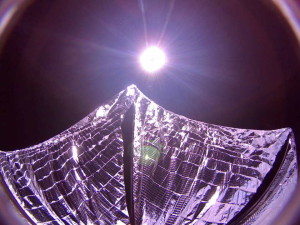 Read their detailed announcement at the following link: