These relatively small surface combatants have full load displacements in the 3,400 – 3,900 ton range, making them smaller than most destroyer and frigate-class ships in the world’s navies. 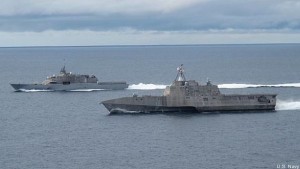 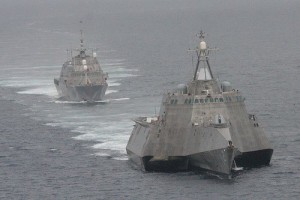 Originally LCS was conceived as a fleet of 52 small, fast, multi-mission ships designed to fight in littoral (shallow, coastal) waters, with roll-on / roll-off mission packages intended to give these ships unprecedented operational flexibility. In concept, it was expected that mission module changes could be conducted in any port in a matter of hours. In a 2010 Department of Defense (DoD) Selected Acquisition Report, the primary missions for the LCS were described as:

Both competing firms met a Congressionally-mandated cost target of $460 million per unit, and, in December 2010, Congress gave the Navy authority to split the procurement rather than declare a single winner. Another unique aspect of the LCS program was that the Defense Acquisition Board split the procurement further into the following two separate and distinct programs with separate reporting requirements:

When the end product is intended to be an integrated combatant vessel, you don’t need to be a systems analyst to know that trouble is brewing in the interfaces between the seaframes and the mission modules somewhere along the critical path to LCS deployment.

There are three LCS mission modules:

These mission modules are described briefly below:

Each LCS is lightly armed since its design basis surface threat is an individual small, armed boat or a swarm of such boats. The basic anti-surface armament on an LCS seaframe includes a single 57 mm main gun in a bow turret and everal small (.50 cal) machine guns.  The SUW module adds twin 30mm Bushmaster cannons, an aviation unit, a maritime security module (small boats), and relatively short-range surface-to-surface missiles.

Each LCS has a hanger bay for its embarked aviation unit, which is comprised of one manned MH-60R Sea Hawk helicopter and one MQ-8B Fire Scout unmanned aerial vehicle (UAV, a small helicopter). As part of the SUW module, these aviation assets are intended to be used to identify, track, and help prosecute surface targets.

That original short-range missile collaboration with the Army failed when the Army withdrew from the program. As of December 2016, the Navy is continuing to conduct operational tests of a different Army short-range missile, the Longbow Hellfire, to fill the gap in the SUW module and improve the LCS’s capability to defend against fast inshore attack craft.

In addition to the elements of the SUW module described above, each LCS has a RIM-116 Rolling Airframe Missile (RAM) system or a SeaRAM system intended primarily for anti-air point defense (range 5 – 6 miles) against cruise missiles. A modified version of the RAM has limited capabilities for use against helicopters and nearby small surface targets.

In 2015, the Navy redefined the first increment of the LCS SUW capability as comprising the Navy’s Visit, Board, Search and Seizure (VBSS) teams. This limited “surface warfare” function is comparable to the mission of a Coast Guard cutter.

While the LCS was not originally designed to have a long-range (over the horizon) strike capability, the Navy is seeking to remedy this oversight and is operationally testing two existing missile systems to determine their suitability for installation on the LCS fleet. These missiles are the Boeing Harpoon and the Norwegian Konigsberg Naval Strike Missile (NSM). Both can be employed against sea and land targets.

The LCS does not yet have an operational anti-submarine warfare (ASW) capability because of ongoing delays in developing this mission module.

The sonar suite is comprised of a continuously active variable depth sonar, a multi-function towed array sonar, and a torpedo defense sonar. For the ASW mission, the MH-60R Sea Hawk helicopter will be equipped with sonobuoys, dipping sonar and torpedoes for prosecuting submarines. The MQ-8B Fire Scout UAV also can support the ASW mission.

Use of these ASW mission elements is shown in the following diagram (click on the graphic to enlarge): 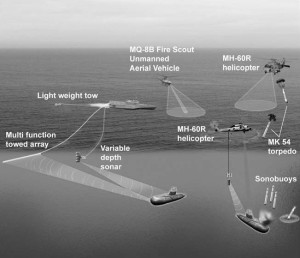 In 2015, the Navy asked for significant weight reduction in the 105 ton ASW module.

The LCS does not yet have an operational mine countermeasures capability. The original complex deployment plan included three different unmanned vehicles that were to be deployed in increments.

Use of these MCM mission elements is shown in the following diagram (click on the graphic to enlarge): 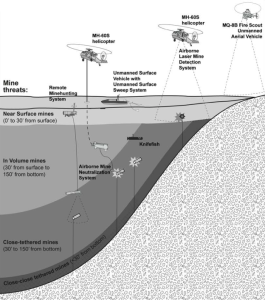 Original IOC was expected to be 2014. The unreliable RMMV was cancelled in 2015, leaving the Navy still trying in late 2016 to define how an LCS will perform “volume searches.” CUSV and Knifefish development are in progress.

It appears the Navy is not planning to conduct initial operational test & evaluation of a complete MCM module before late 2019 or 2020.

By January 2012, the Navy acknowledged that mission module change-out could take days or weeks instead of hours. Therefore, each LCS will be assigned a single mission, making module changes a rare occurrence. So much for operational flexibility.

LCS has become the poster child for a major Navy ship acquisition program that has gone terribly wrong.

To address some of these issues, the LCS crew complement has been increased, an unusual crew rotation process has been implemented, and the first four LCSs have been withdrawn from operational service for use instead as training ships.

To address some of the LCS warfighting limitations, the Navy, in February 2014, directed the LCS vendors to submit proposals for a more capable vessel (originally called “small surface combatant”, now called “frigate” or FF) that could operate in all regions during conflict conditions. Key features of this new frigate include:

As you would expect, the new frigate proposals look a lot like the existing LCS designs. In 2016, the GAO noted that the Navy prioritized cost and schedule considerations over the fact that a “minor modified LCS” (i.e., the new frigate) was the least capable option considered.”  The competing designs for the new frigate are shown below (click on the graphic to enlarge): 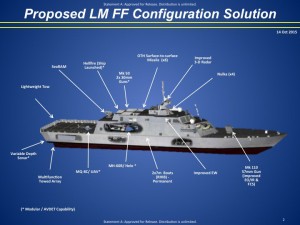 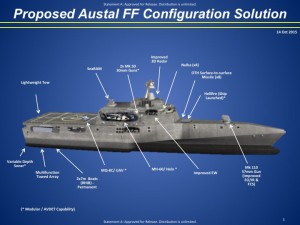 GAO reported the following estimates for the cost of the new multi-mission frigate and its mission equipment:

Note that the frigate lead ship cost estimate is less than the GAO’s estimated actual cost of an average LCS plus one mission module. Based on the vendor’s actual LCS cost control history, I’ll bet that the GAO’s frigate cost estimates are just the starting point for the cost growth curve.

To make room for the new frigate in the budget and in the current 308-ship fleet headcount limit, the Navy reduced the LCS buy to 32 vessels, and planed to order 20 new frigates from a single vendor. In December 2015, the Navy reduced the total quantity of LCS and frigates from 52 to 40. By mid-2016, Navy plans included only 26 LCS and 12 frigates.

2016 Top Ten Most Powerful Frigates in the World

To see what international counterparts the LCS and FF are up against, check out the January 2016 article, “Top Ten Most Powerful Frigates in the World,” which includes frigates typically in the 4,000 to 6,900 ton range (larger than LCS). You’ll find this at the following link:

So what do you think?

A 5 April 2019 article in The National Interest reported:

“The Pentagon Operational Test & Evaluation office’s review of the LCS fleet published back in January 2018 revealed alarming problems with both Freedom and Independence variants of the line, including: concerning issues with combat system elements like radar, limited anti-ship missile self-defense capabilities, and a distinct lack of redundancies for vital systems necessary to reduce the chance that “a single hit will result in loss of propulsion, combat capability, and the ability to control damage and restore system operation…..Neither LCS variant is survivable in high-intensity combat,” according to the report.”

The article’s link to the referenced 2018 Pentagon DOT&E report now results on a “404 – Page not found!” message on the DoD website. I’ve been unable to find that report elsewhere on the Internet.  I wonder why? See for yourself here:  https://nationalinterest.org/blog/buzz/no-battleship-littoral-combat-ship-might-be-navys-worst-warship-50882

I’d chalk the LCS program up as a huge failure, delivering unreliable, poorly-armed ships that do not yet have a meaningful, operational role in the U.S. Navy and have not been integrated as an element of a battle group.  I think others agree.  The defense bill signed by President Trump in December 2019 limits LCS fleet size and states that none of the authorized funds can be used to exceed “the total procurement quantity of 35 Littoral Combat Ships.” Do I hear an Amen?

A lot of other resources are available on the Internet describing the LCS program, early LCS operations, the LCS-derived frigate program, and other international frigates programs. For more information, I recommend the following resources dating from 2016 to 2019: