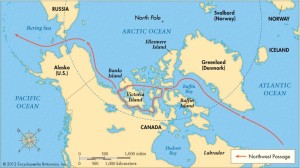 While it has been common for icebreakers, research vessels and nuclear submarines to operate in these waters, it is quite uncommon for commercial or private vessels to attempt to navigate the Northwest Passage.

The first recorded transit of the Northwest Passage was made in 1903 – 06 by the famous Norwegian polar explorer Roland Amundsen in the ship Gjoa. 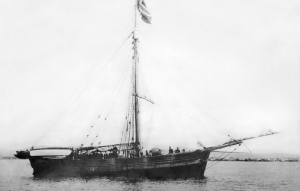 Since then, there have been many full transits of the Northwest Passage. You’ll find John MacFarlane’s list of 126 transits for the period from 1903 – 2006 on the Nauticapedia website at the following link: 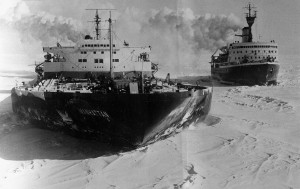 Prior to the Arctic voyage, the SS Manhattan was fitted with an icebreaking bow and heavy steel sheathing along both sides of the hull and in other vulnerable locations to protect against ice. The specific route of the SS Manhattan, from the Atlantic to Prudhoe Bay and then back to the Atlantic, is shown below. Several U.S. and Canadian icebreakers supported the SS Manhattan during its voyage.

Oil was discovered at Prudhoe Bay in 1968. A barrel of crude oil was loaded on SS Manhattan in Prudhoe Bay to symbolize that supertankers operating in the Arctic could serve the newly discovered oil field. Further testing that winter off Baffin Island showed that year-round oil tanker operations in the Arctic were not feasible. Instead, the Trans-Alaska Pipeline from Prudhoe Bay to Valdez, Alaska was built.

In 2007, the Northwest Passage became ice-free and navigable along its entire length without the need for an icebreaker for 36 days during August and September. During that period, the sailing vessel Cloud Nine passed through the Northwest Passage during its 6,640 mile, 73 day transit from the Atlantic to the Pacific. You can read David Thoreson’s blog about this Arctic voyage, Sailing the Northwest Passage, at the following link:

This voyage was a remarkable achievement for a small vessel. In his blog, David Thoreson commented:

“I feel strongly that we have witnessed the end of an era and the beginning of a new one. The golden age of exploration, Amundsen’s era, has come to a close, and a new era of exploration involving study and change in the earth’s climate is just beginning. We on Cloud Nine have experienced both eras. Frozen in and stuck in the ice twice over 13 years, and now sailing through unscathed and witnessing an ice-free Northwest Passage. We have bridged the two eras.”

Are we seeing the start of tourism in the Northwest Passage?

On 10 August 2016, Crystal Serenity departed Vancouver for Seward Alaska and the start of what is scheduled to be a 32-day voyage to New York City via the Northwest Passage. The ship is scheduled to arrive in NYC on 16 September 2016. The planned route for this cruise is shown below. 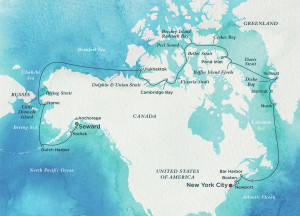 The Crystal Serenity is smaller than SS Manhattan, but still is a fairly big ship, with a length of 820 feet (250 meters), beam of 106 feet (32.3 meters), draft of 25 feet (7.6 meters), and a displacement of 68,870 tons. On this voyage, Capt. Birger Vorland and two Canadian pilots will navigate the Northwest Passage with more than 1,600 passengers and crew.

Crystal Serenity will be accompanied by the icebreaking escort vessel RRS (Royal Research Ship) Ernest Shackleton, which was chartered by Crystal Cruises for this support cruise. Along the planned route, there are few ports that can accommodate a vessel the size of Crystal Serenity. Along most of the route emergency response capabilities are quite limited. Therefore, RRS Shackleton is equipped to serve as a first response vessel in the event of an emergency aboard Crystal Serenity. RRS Shackleton also carries two helicopters and additional crew to support special adventures during the cruise. 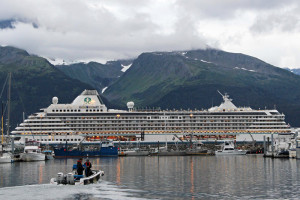 You can find a current report on the sea ice extent along the Northwest Passage at the National Snow and Ice Data Center’s website at the following link:

The ice extent report today is shown in the following chart, which shows that the current ice extent is well below the 1981 – 2010 median. However, there appear to be sections of the Northwest Passage around Banks and Victoria Islands that are still covered by the Arctic ice pack. Crystal Serenity is scheduled to be in these waters soon. 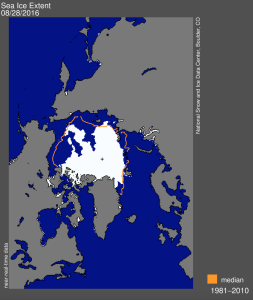 You can track the current position of the Crystal Serenity as it makes its historic voyage at the following link: 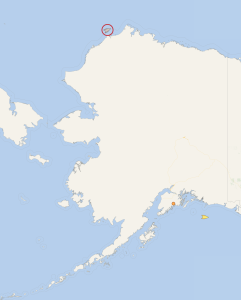 A second cruise already is planned for 2017. You can book your Northwest Passage cruise on the Crystal Cruises website at the following link: 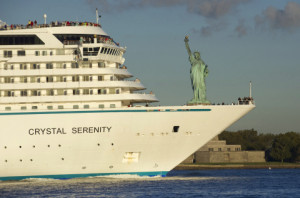