Richard A. Muller, a professor of physics at the University of California, Berkeley, and Facility Senior Scientist at Lawrence Berkeley Laboratory, is the author of in intriguing new book entitled, “NOW, the Physics of Time.” 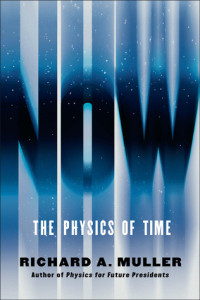 In Now, Muller addresses weaknesses in past theories about the flow of time and the meaning of “now.” He also presents his own revolutionary theory, one that makes testable predictions. He begins by describing the physics building blocks of his theory: relativity, entropy, entanglement, antimatter, and the Big Bang. Muller points out that the standard Big Bang theory explains the ongoing expansion of the universe as the continuous creation of new space. He argues that time is also expanding and that the leading edge of the new time is what we experience as “now.”

You’ll find a better explanation in the UC Berkeley short video, “Why does time advance?: Richard Muller’s new theory,” at the following link:

In the video, Muller explains that his theory would have resulted in a measurable 1 millisecond delay in “chirp” seen in the first gravitational wave signals detected on 11 February 2016 by the Laser Interferometer Gravitational-Wave Observatory (LIGO). LIGO’s current sensitivity precluded seeing the predicted small delay. If LIGO and other and-based gravity wave detector sensitivities are not adequate, a potentially more sensitive space-based gravity wave detection array, eLISA, should be in place in the 2020s to test Muller’s theory.

It’ll be interesting to see if LIGO, any of the other land-based gravity wave detectors, or eLISA will have the needed sensitivity to prove or disprove Muller’s theory.