In early December 2016, the U.S. Department of Education and the Institute for Educational Sciences’ (IES) National Center for Educational Statistics (NCES) issued a report entitled, “Performance of U.S. 15-Year-Old Students in Science, Reading, and Mathematics Literacy in an International Context: First Look at PISA 2015.” 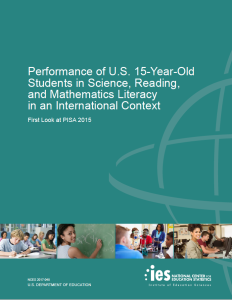 The NCES describes PISA as follows:

“The Program for International Student Assessment (PISA) is a system of international assessments that allows countries to compare outcomes of learning as students near the end of compulsory schooling. PISA core assessments measure the performance of 15-year old students in science, reading and mathematics literacy every 3 years. Coordinated by the Organization for Economic Cooperation and Development (OECD), PISA was first implemented in 2000 in 32 countries. It has since grown to 73 educational systems in 2015. The United States has participated in every cycle of PISA since its inception in 2000. In 2015, Massachusetts, North Carolina and Puerto Rico also participated separately from the nation. Of these three, Massachusetts previously participated in PISA 2012.”

In each country, the schools participating in PISA are randomly selected, with a goal that the sample of student selected for the examination are representative of a broad range of backgrounds and abilities. About 540,000 students participated in PISA 2015, including about 5,700 students from U.S. public and private schools. All participants were rated on a 1,000 point scale.

The authors describe the contents of the PISA 2015 report as follows:

In the three subject areas assessed by PISA 2015, key U.S. results include the following:

In comparison, students in the small nation of Singapore were the top performers in all three subject areas, recording the following results in PISA 2015:

Numerous articles have been written on the declining math performance and only average science and reading performance of the U.S. students that participated in PISA 2015. Representative articles include:

I think the authors of these articles are correct and the U.S. educational system is failing to develop students in high school that, on average, will be able to compete effectively in a knowledge-based world economy with many of their international peers.

Click the link to the PISA 2015 report (above) and read about the international test results for yourself.