Dr. Lyman Spitzer invented the stellarator in 1951 and built several versions of this magnetic plasma confinement machine at Princeton University during the 1950s and 1960s, establishing the world famous Princeton Plasma Physics Laboratory (PPPL) in the process. Dr. Spitzer’s earliest Stellarators were figure-eight devices as shown in the following photo. 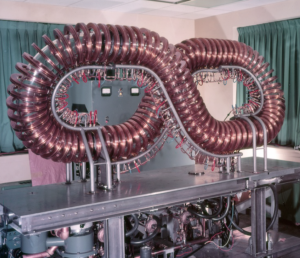 Example of an early stellarator at the 1958 Atoms for Peace Conference, Geneva

In these first-generation stellarators, field coils wrapped around the figure-eight vacuum vessel provided the basic plasma confinement field. The physical twist in the stellarator’s structure twisted the internal magnetic confinement field and cancelled the effects of plasma ion drift during each full circuit around the device. You can download Dr. Spitzer’s historic 1958 IAEA conference paper, “The Stellarator Concept,” at the following link:

The next generation of stellarators adopted a simpler torus shape and created the twist in the magnetic confinement field with helical field coils outside the vacuum vessel.

While stellarators achieved many important milestones in magnetic confinement, by the late 1960s, the attention of the fusion community was shifting toward a different type of magnetic confinement machine: the tokamak. Since then, this basic design concept has been employed in many of the world’s major fusion devices, including the Alcator-C Mod (MIT, USA), Doublet III-D (DIII-D at General Atomics, USA), Tokamak Fusion Test Reactor (TFTR at PPPL, USA), Joint European Torus (JET, UK), National Spherical Torus Experiment Upgrade (NSTX-U at PPPL, USA) and the International Thermonuclear Experimental Reactor (ITER, France).

Now, almost 50 years later, there is significant renewed interest in stellarators. The newest device, the Wendelstein 7-X stellarator, became operational in 2016. It may help determine if modern technology has succeeded in making the stellarator a more promising path to fusion power than the tokamak.

Comparison of Tokamaks and Stellarators

Modern tokamaks and stellarators both implement plasma confinement within a (more or less) toroidal vacuum vessel that operates at very high vacuum conditions, on the order of 10-7 torr. Both types of machines use the combined effects of two or more magnetic fields to create and control helical field lines (HFL) that enable plasma confinement and reduce particle drift in the circulating plasma.

In the following description, the simple “classical” tokamak configuration shown below will be the point of reference. 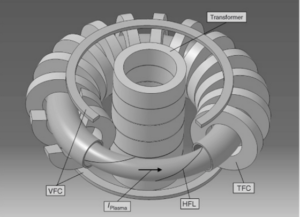 The main features of a tokamak are summarized below. 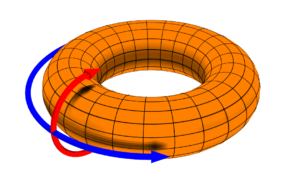 The simple “classical” stellarator configuration shown below will be the point of reference for the following discussion. 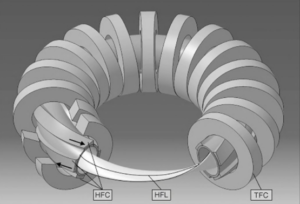 The main features of a stellarator are summarized below.

You’ll find more comparative information in the July 2016 paper by Y. XU, “A general comparison between tokamak and stellarator plasmas,” which is available at the following link:

In the last two decades, dramatic improvements in computer power and 3-dimensional modeling capabilities have enabled researchers and designers to accurately model a stellarator’s complex magnetic fields, plasma behavior, and mechanical components (i.e., vacuum vessel, magnet systems and other structures). This has enabled implementation of a “plasma first” design process in which the initial design focus is on optimizing plasma equilibrium based on selected physics conditions. Key goals of this optimization process are to define plasma equilibrium conditions that reduce heat transport and particle loss from the plasma. As you might suspect, there are different technical bases for approaching the plasma optimization process. The stellarator’s magnet systems are designed to produce the confinement field needed for the specified, optimized plasma design.

This class of modern, optimized stellarators is characterized by complex, twisting plasma shapes and non-planar, modular toroidal coils that are individually designed, built and assembled. The net result is a stellarator with significantly better confinement performance that earlier stellarator designs. In this post, we’ll look in more detail at the following three advanced stellarators:

The physical layout and scale of the W7-AS machine is shown in the first diagram, below, with more details on the magnet system in the following diagram. 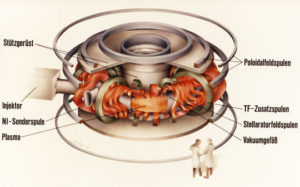 Above & below: Wendelstein 7-AS. Source: Max Planck IPP, I. Weber 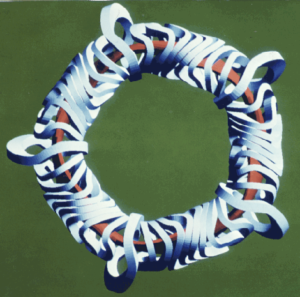 You’ll find more details on the W7-AS on the IPP website at the following link:

Its successor is the Wendelstein 7-X.

HSX is a small modular coil advanced stellarator that began operation in 1999 at the Electrical and Computer Engineering Department at the University of Wisconsin-Madison. HSX basic design parameters are:

The physical arrangement of HSX is shown in the following diagram. 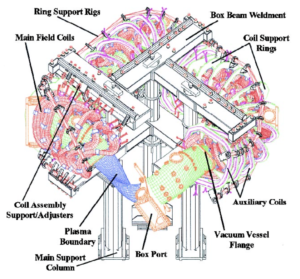 You can read Yokoyama’s complete paper at the following link:

The HSX main magnetic field is generated by a set of 48 non-planar, modular coils, arranged in four field periods, yielding the twisting flux shape shown below. 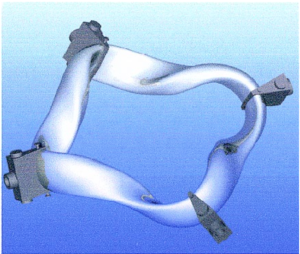 The HSX team reported that “this is the first demonstration that quasi-symmetry works, and you can actually measure the reduction in transport that you get.”

The home page for this project is at the following link:

You can download a description of the HSX here:

The Wendelstein 7-X (W7-X) is a Helias (helical advanced stellarator) and is the first large-scale optimized stellarator; significantly larger than Wendelstein 7-AS and HSX. The complete W7-X machine weighs about 750 tons, with about 425 tons operating under cryogenic conditions. The superconducting magnet system is designed for steady-state, high-power operation; nominally 30 minutes of plasma operation at 10 MW power. W7-X basic design parameters are:

The IPP home page for this project is here:

The W7-X is drift optimized for improved thermal and fast ion confinement by: (a) implementing quasi-symmetry to reduce transport losses, (b) minimizing plasma currents (Pfirsch-Schluter & bootstrap currents) to improve equilibrium, and (c) designing a large magnetic well in the plasma cross-section to avoid plasma pressure instabilities.

The primary purpose of the Wendelstein 7-X is to investigate the new stellarator’s suitability for extrapolation to a fusion power plant design. The IPP website provides the following clarification:

“It is expected that plasma equilibrium and confinement will be of a quality comparable to that of a tokamak of the same size. But it will avoid the disadvantages of a large current flowing in a tokamak plasma: With plasma discharges lasting up to 30 minutes, Wendelstein 7-X is to demonstrate the essential stellarator property, viz. continuous operation.”

The main assembly of Wendelstein 7-X was completed in 2014. An IPP presentation on the manufacturing and assembly of W7-X is at the following link:

You’ll also find a good video, “Wendelstein 7-X — from concept to reality,” which provides an overview of the design and construction of the W7-X stellarator and the associated research facility, at the following link:

After engineering tests, the first plasma was produced at W7-X on 10 December 2015. A November 2016 article in Nature summarized on the results of initial operation of W7-X.  The article, entitled, “Confirmation of the topology of the Wendelstein 7-X magnetic field to better than 1:100,000,” confirmed that the W7-X is producing the intended confinement field. This article includes the following 3-D rendering and description of the complex magnetic coil sets that establish the twisting plasma confinement fields in the W7-X.

“Some representative nested magnetic surfaces are shown in different colors in this computer-aided design (CAD) rendering, together with a magnetic field line that lies on the green surface. The coil sets that create the magnetic surfaces are also shown, planar coils in brown, non-planar coils in grey. Some coils are left out of the rendering, allowing for a view of the nested surfaces (left) and a Poincaré section of the shown surfaces (right). Four out of the five external trim coils are shown in yellow. The fifth coil, which is not shown, would appear at the front of the rendering.”

A more detailed mechanical view of the W7-X, with a scale (gold) human figure is shown in the following diagram: 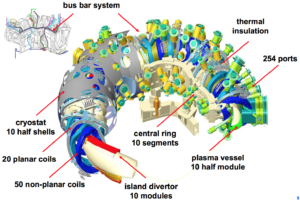 The large scale of the W7-X vacuum vessel is even more apparent in the following photo. 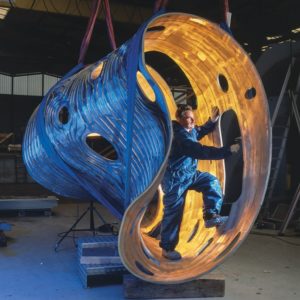 A segment of W7-X vacuum vessel.  Source: adapted from IPP by C. Bickel and A. Cuadra/Science

Most of the wall protection components are uncooled. Operational limits on the W7-X (i.e., pulse duration, various temperatures) help protect the integrity of wall components.

The status of the W7-X as of February 2017 is outlined in a presentation by the W7-X team to the Fusion Energy Science Advisory Committee (FESAC), entitled “Recent results and near-term plans for Wendelstein 7-X,” which is available at the following link:

Update 19 March 2020:  Proof of principal and a new upgrade campaign

In February 2020, Princeton Plasma Physics Laboratory (PPPL) reported on the SciTechDaily website that W7-X operation through the end of 2018 had successfully demonstrated the expected capability to moderate plasma leakage and improve plasma confinement.  W7-X operation had achieved hundred-second pulses with heating powers of two megawatts and plasma energies of 200 megajoules.  PPPL physicist Novimir Pablant stated, “This research validates predictions for how well the optimized design of the W7-X reduces neoclassical transport….,” and, “The research marks the first step in showing that high-performance stellarator designs such as W-7X are an attractive way to produce a clean and safe fusion reactor.” 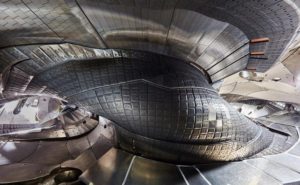 Wide angle view of the interior of the Wendelstein 7-X plasma vessel, showing the different armor materials designed to take up the heat from the plasma. The surface contour of the wall follows the shape of the plasma. On average, the radius of the plasma is 55 cm. Credit: Bernhard Ludewig, Max Planck Institute of Plasma Physics

At the end of 2018, operation of the W7-X ceased and a new round of modifications was started.  Key upgrades being implemented now for the W7-X are: 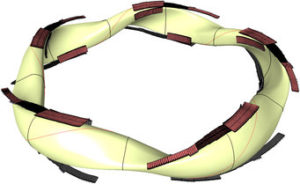 IPP reports that this upgrade work is expected to continue until the end of 2021.  You’ll find more details on the upgrade work, including the design of the divertors, on the IPP website at the following link:  https://www.ipp.mpg.de/4828222/01_20

Following the success of two Wendelstein 7-X experimental campaigns from March 2016 to October 2018, a promising path forward is being pursued by the Max Planck Institute for Plasma Physics.  Nonetheless, I believe my previous conclusion (below, from the original post in 2017) still stands.  We’ll know a lot more after the W7-X upgrade work is completed and operations resume in late 2021.

So the jury is still out on the ability of advanced, optimized stellarators to take the lead over tokamaks in the long, hard journey toward the goal of delivering usable power from a fusion machine.  Hopefully, the advanced stellarators will move the fusion community closer to that goal.  No doubt, we still have a very long way to go before fusion power becomes a reality.

For more background information on stellarators:

A summary of Dr. Spitzer’s pioneering work at PPPL is documented in the following presentation:

There are good briefings on the basics of stellarator design and operation in the following two documents: