Professor Harald Haas (University of Edinburgh) invented Li-Fi wireless technology, which is functionally similar to radio-frequency Wi-Fi but uses visible light to communicate at high speed among devices in a network. Professor Hass is the founder of the company PureLiFi (http://purelifi.com), which is working to commercialize this technology. The following diagram from PureLiFi explains how Li-Fi technology works. 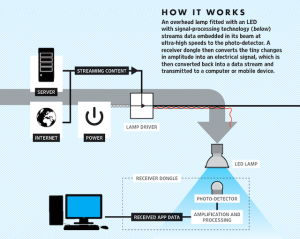 A special (smart) LED (light-emitting diode) light bulb capable of modulating the output light, and a photoreceptor connected to the end-user’s device are required.

You can see Professor Hass’ presentation on Li-Fi technology on the TED website at the following link:

Key differences between Li-Fi and Wi-Fi include:

You can see a video with a simple Li-Fi demonstration using a Velmenni Jugnu smart LED light bulb and a smartphone at the following link: 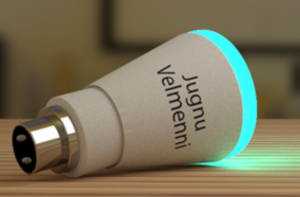 The radio frequency spectrum for Wi-Fi is crowded and will only get worse in the future. A big benefit of Li-Fi technology is that it does not compete for any part of the spectrum used by Wi-Fi.