With the new movie, Star Wars: The Force Awakens, being released this week, I thought this would be an appropriate time to consider how Star Wars technology compares to the technology in another popular sci-fi series: Star Trek.

On the surface, the Star Wars Empire has much larger and more imposing faster-than-light starships than the Star Trek Federation. See the relative size comparison below. 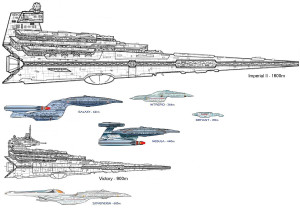 Of course, there are many other factors to be considered in the technology comparison. Fortunately, there already has been a lot written on this subject. I refer you to two recent articles.

Author Todd Gardiner published a technology comparison on 29 March 2015, which you can read on GIZMODO, at the following link: 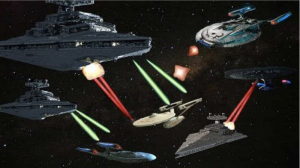 The two sci-fi technologies were compared and ranked in the following categories:

The net result of Todd Gardiner’s comparison was a tie between Star Wars and Star Trek technologies.

On 10 April 2015, a similar comparison written by Harry Guinness appeared in MakeUseOf, at the following link:

The author noted that, “Star Trek writers at least attempted to create plausible explanations for the technology. …..it’s easy to see why some fans consider Star Wars to be an epic space fantasy rather than a science fiction tale”.

Nonetheless, Star Wars and Star Trek technologies were compared and ranked in the following categories:

In this comparison, Star Trek wins by a large margin.

So, what do you think? In a head-to-head space battle, would you rather be serving on an Imperial Star Destroyer or on one of the Federation’s Galaxy-class or Sovereign-class starships?