The Cubify (cubify.com) iSense 3D scanner is a high-resolution, infra red depth sensor that clips onto an iPad, uses the iPad camera, accelerometer and gyroscopes to understand its orientation relative to the subject, and with the all-important 3D scanning application running on the iPad, creates a scale 3D model of the subject. 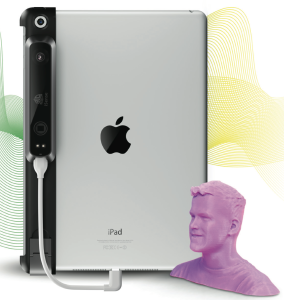 I first saw the iSense 3D scanner demonstrated in July 2015 at Comic-Con San Diego. With the scanner attached to the back of an iPad, the person conducting the demonstration selected a subject to be scanned and then walked around that person at a distance of about three feet while monitoring the real-time scan progress on the iPad screen. In about 90 seconds the scan around the subject was complete and it took about another 90 seconds for the software to render the 3D model (a “point cloud”) of the subject’s head. Since this was a quick demonstration, there were a couple of small voids in the 3D model (i.e., under the chin and nose where the scanner didn’t “see”), but otherwise, the resulting model was an accurate scale representation of the subject. What was even more remarkable was that this process was done using the computing power of a current-generation iPad. The resulting color 3D model could be processed further (i.e., to create a mesh model) or sent for printing to a local 3D printer or a printing service accessed via the internet. A version of iSense for the iPhone also is available.

You can read the technical specifications for iSense at the following link:

A similar scanner with greater capabilities is the Structure Sensor from Occipital Labs. The Structure Sensor operates over greater distances than the iSense and appears to be intended to support a greater range applications, including the following:

You can find more information on the Structure Sensor at the following link:

If you are curious about this type of scanning technology, there are several demonstrations available on YouTube. If you are willing to spend 21 minutes to watch a detailed test of the Structure Sensor, I recommend the 9 December 2014, “Tested In-Depth: Structure Sensor 3D Scanner,” by Will and Norm, which you can view at the following link:

Here are a few screen shots from Will & Norm’s scanning demonstration. During the scan, the white areas represent areas that have been successfully scanned. 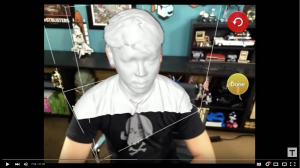 The complete point cloud model is shown below. This model can be rotated and viewed from any angle. 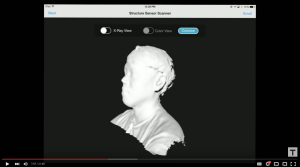 The rendered model, with colors and textures captured by the iPad’s camera, is shown below. 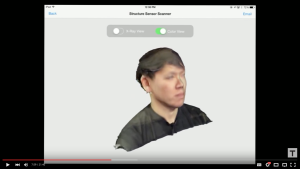 So, at Uncle Joe’s 90th birthday party, get out your iPad with an iSense or Structure Sensor, capture Uncle Joe in 3D, and print a bust of Uncle Joe to commemorate the occasion. If you’re more ambitious, you can capture the whole room with a Structure Sensor and build a game or simulation into this virtual environment.

Recent reviews posted online indicate that this type of 3D scanning is not yet mature and it may be difficult to get repeatable good results. Nonetheless, it will be interesting to see the creative applications of this scanning technology that emerge in the future.