Herbert George Wells was born on 21 September 1866 in Bromley, in southeast England. While he may be best known for his science fiction novels, H.G. Wells was a prolific writer in many genres, including history, politics, social commentary, and textbooks. 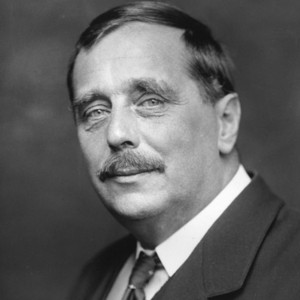 His most memorable Victorian-era science fiction novels include:

Wells was a contemporary of Jules Verne (author of 20,000 Leagues Under the Sea, Journey to the Center of the Earth, From the Earth to the Moon and much more) and Hugo Gernsbacher (author and publisher of the first science fiction magazine, Amazing Stories, and namesake for the science fiction Hugo Awards given annually by the World Science Fiction Society). Together, these men commonly are considered as the fathers of modern science fiction. Wells and Verne are strong influences on the modern science fiction subgenre known as steampunk, which incorporates Victorian-era (late 1880s) technology (steam power, early electrical devices) and design aesthetics (costumes, accessories) into a retro-futuristic alternative history of that period.

On 30 October 1938, Orson Welles’ radio adaptation of H. G. Wells War of the Worlds was broadcast on The Mercury Theater of the Air, causing a minor panic among listeners who mistook the broadcast for an actual news report of an alien invasion of Earth.

Several H. G. Wells science fiction novels have been made (and re-made) into movies. 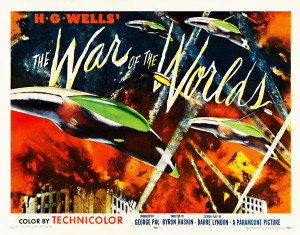 H.G. Wells also was a futurist, and he wrote extensively on his vision of life and technology in the 20th century. Important titles on this matter are:

Following is a brief overview of these four titles.

H. G. Wells’ first popular non-fiction work was entitled, Anticipations of the Reaction of Mechanical and Scientific Progress upon Human Life and Thought, which is commonly known by the shorter title, Anticipations. This work was first published in 1901 in serial form in magazines in the UK and the USA and then in book form later that same year. In Chapter 1, H. G. Wells describes the purpose of Anticipations as follows:

“It is proposed in this book to present as orderly an arrangement as the necessarily diffused nature of the subject admits, certain speculations about the trend of present forces, speculations which, taken all together, will build up an imperfect and very hypothetical, but sincerely intended forecast of the way things will probably go in this new century. Hitherto such forecasts have been presented almost invariably in the form of fiction…..Our utmost aim is a rough sketch of the coming times, a prospectus, as it were, of the joint undertaking of mankind in facing these impending years.”

The complex structure of the first sentence in the above paragraph might have been impressive enough to win H.G. Wells an award in the Bulwer – Lytton Fiction Contest (see my 6 September 2016 post on BLFC).

Anticipations is organized into nine chapters as follows:

You’ll find the full text of the 4th edition (1902) of Anticipations on the Internet Archive website at the following link:

For a quick synopsis of Anticipations, I refer you to Wikipedia at the following link:

With 115 years of hindsight, many of H. G. Wells’ predictions in Anticipations seem quite accurate, particularly with respect to the evolution of motor vehicles, development of urban sprawl, and the evolution of warfare to adapt to the availability of motor vehicles and aircraft. Within two years of publication, H. G. Wells publically took a stand against eugenics and for human rights, contrary to positions he had taken in Chapter 9 of Anticipations.

H. G. Wells provided another perspective on the future in his 1902 lecture at the Royal Institution of London, entitled The Discovery of the Future, which was published in magazines in the UK and USA and later published as a book. His basic thesis is that there are “two divergent types of minds” that can influence the future.

In this book, Wells states:

Later in this book, Wells states:

“I must confess that I believe quite firmly that an inductive knowledge of a great number of things in the future is becoming a human possibility. I believe that the time is drawing near when it will be possible to suggest a systematic exploration of the future.”

He concludes this book by stating:

“All this world is heavy with the promise of greater things, and a day will come, one day in the unending succession of days, when beings, beings who are now latent in our thoughts and hidden in our loins, shall stand upon this earth as one stands upon a footstool, and shall laugh and reach out their hands amid the stars.”

You’ll find the full text of The Discovery of the Future on the Internet Archive website at the following link:

This science fiction novel, serialized and published in 1908, provided a prophetic view of the use of aircraft and airships in warfare. This basic vision of military air power would be realized in less than a decade during World War I (July 1914 – November 1918), though at a much less destructive scale than in the novel.

You can download the audiobook from the Internet Archive at the following link:

You can read a short synopsis of this novel on Wikipedia at the following link:

Coming only 15 years after the end of World War I, this science fiction novel is a cautionary tale that addresses the terrible consequences of a future international war. Following the start of war in 1940, the plot follows the decay of society, the rise of local warlords and their fall following the creation of a benevolent “Dictatorship of the Air” to restore worldwide peace. The story jumps forward in time to the year 2036, where technology provides a high standard of living for all citizens. Nonetheless, there remains a tension between the technical leadership and citizens who are against progress.

A loose adaptation of the novel was made into the science fiction movie Things to Come, which was released in 1936. 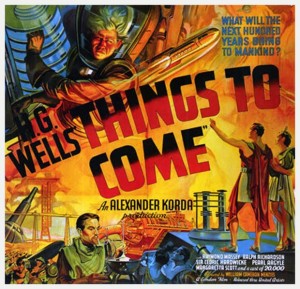 The movie portrayed many of the advanced technologies that exist in 2036; many of which have become commonplace in our modern life, including desktop video displays, big flat screen television, global communications, compound helicopters, hydroponics, use of composite materials in building construction instead of steel. Other technologies, such as monorail urban transportation, powerful (laser) mining machines, large-scale holographic projectors, and an electric Space Gun for launching a manned spacecraft on a circumlunar journey from Earth, will have to wait a bit longer.

You can view the complete movie on YouTube at the following link:

You’ll find a good summary of the movie by Mark Bourne at the following link:

Some of the technologies appearing in the movie are discussed in a six-page article in the May 1936 issue of Modern Mechanix & Inventions Magazine. You’ll find the complete Modern Mechanix article at the following link: 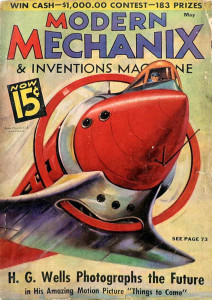 As a writer and futurist, H. G. Wells has enriched our lives in many ways. I hope you’ll follow the links posted above and take some time to get a better understanding of this great man.