The United States Air Force began investigating unidentified flying objects (UFOs) in the fall of 1947 under a program called Project Sign, which later became Project Grudge, and in January 1952 became Project Blue Book. As you might expect, the USAF developed a reporting protocol for these projects.

Starting in 1951, the succession of Air Force documents that provided UFO reporting guidance is summarized below:

This letter, entitled, “Reporting of Information on Unidentified Flying Objects,” dated 19 December 1951, may be the original guidance document for UFO reporting. So far, I have been unable to find a copy of this document. The Project Blue Book archives contain examples of UFO reports from 1952 citing AFOIN-C/CC-2.

The first reporting protocol I could find was Air Force Letter AFL 200-5, “Unidentified Flying Objects Reporting,” dated 29 April 1952, which was issued on behalf of the Secretary of the USAF by Hoyt S. Vandenberg, Chief of Staff of the USAF. 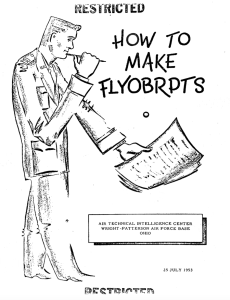 This guidance document provides an interesting narrative about UFOs through 1953, explains how to collect information on a UFO sighting, including interacting with the public during the investigation, and how to complete a FLYOBRPT using four detailed data collection forms.

This report showed that the USAF had a sense of humor about UFO reporting. 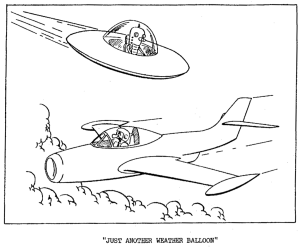 Download “How to Make FLYOBRPTs” at the following link:

In late October 1968, the University of Colorado’s final report was completed and submitted for review by a panel of the National Academy of Sciences. The panel approved of the methodology and concurred with Edward Condon’s conclusion:

“That nothing has come from the study of UFOs in the past 21 years that has added to scientific knowledge. Careful consideration of the record as it is available to us leads us to conclude that further extensive study of UFOs probably cannot be justified in the expectation that science will be advanced thereby.”

In January 1969, a 965-page paperback version of the report was published under the title, “Scientific Study of Unidentified Flying Objects.”

You’ll find a good history by of the U.S. Air Force UFO programs written by Thomas Tulien at the following link: