On 14 December, 2016, the Secretary of the Navy, Ray Mabus, announced that the new class of U.S. fleet ballistic missile (FBM) submarines will be known as the Columbia-class, named after the lead ship, USS Columbia, SSBN-826 and the District of Columbia. Formerly, this submarine class was known simply as the “Ohio Replacement Program”. 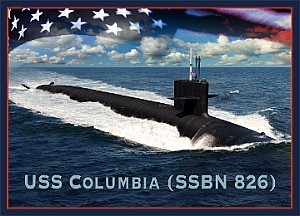 Ohio-class SSBNs make up the current fleet of U.S. FBM submarines, all of which were delivered to the Navy between 1981 and 1997. Here are some key points on the Ohio-class SSBNs:

It is notable that the Trident II missile initial operating capability (IOC) occurred in March 1990. The Trident D5LE (life-extension) version is expected to remain in service until 2042.

Features of the new Columbia-class SSBN include:

Design collaboration with the UK

The U.S. Navy and the UK’s Royal Navy are collaborating on design features that will be common between the Columbia-class and the UK’s Dreadnought-class SSBNs (formerly named “Successor” class). These features include:

The CMC is being designed as a structural “quad-pack”, with integrated missile tubes and submarine hull section. Each tube measures 86” (2.18 m) in diameter and 36’ (10.97 m) in length and can accommodate a Trident II SLBM, which is the type currently deployed on both the U.S. and UK FBM submarine fleets. In October 2016, General Dynamics received a $101.3 million contract to build the first set of CMCs. 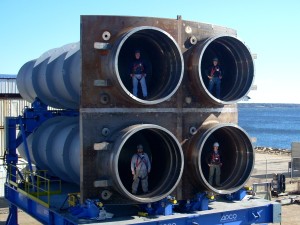 The “Submarine Shaftless Drive” (SDD) concept that the UK is believed to be planning for their Dreadnought SSBN has been examined by the U.S. Navy, but there is no information on the choice of propulsor for the Columbia-class SSBN.

In the early 2000s, the Navy kicked off their future SSBN program with a “Material Solution Analysis” phase that included defining initial capabilities and development strategies, analyzing alternatives, and preparing cost estimates. The “Milestone A” decision point reached in 2011 allowed the program to move into the “Technology Maturation & Risk Reduction” phase, which focused on refining capability definitions and developing various strategies and plans needed for later phases. Low-rate initial production and testing of certain subsystems also is permitted in this phase. Work in these two “pre-acquisition” phases is funded from the Navy’s research & development (R&D) budget.

On 4 January 2017, the Navy announced that the Columbia-class submarine program passed its “Milestone B” decision review. The Acquisition Decision Memorandum (ADM) was signed by the Navy’s acquisition chief Frank Kendall. This means that the program legally can move into the Engineering & Manufacturing Development Phase, which is the first of two systems acquisition phases funded from the Navy’s shipbuilding budget. Detailed design is performed in this phase. In parallel, certain continuing technology development / risk reduction tasks are funded from the Navy’s R&D budget.

The total budget for the Columbia SSBN program is a bit elusive. In terms of 2010 dollars, the Navy had estimated that lead ship would cost $10.4 billion ($4.2 billion for detailed design and non-recurring engineering work, plus $6.2 billion for construction) and the 11 follow-on SSBNs will cost $5.2 billion each. Based on these cost estimates, construction of the new fleet of 12 SSBNs would cost $67.6 billion in 2010 dollars. Frank Kendall’s ADM provided a cost estimate in terms of 2017 dollars in which the detailed design and non-recurring engineering work was amortized across the fleet of 12 SSBNs. In this case, the “Average Procurement Unit Cost” was $8 billion per SSBN. The total program cost is expected to be about $100 billion in 2017 dollars for a fleet of 12 SSBNs. There’s quite a bit if inflation between the 2010 estimate and new 2017 estimate, and that doesn’t account for future inflation during the planned construction program that won’t start until 2021 and is expected to continue at a rate of one SSBN authorized per year.

The UK is contributing financially to common portions of the Columbia SSBN program.  I have not yet found a source for details on the UK’s contributions and how they add to the estimate for total program cost.

An updated schedule for Columbia-class SSBN program was not included in the recent Navy announcements. Previously, the Navy identified the following milestones for the lead ship:

You can see the fleet size projections for all classes of Navy submarines in the following chart. The SSBN fleet is represented by the middle trend line. 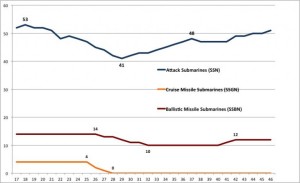 Based on the Navy’s recent poor performance in other major new shipbuilding programs (Ford-class aircraft carrier, Nimitz-class destroyer, Littoral Combat Ship), their ability to meet the projected delivery schedule for the Columbia-class SSBN’s must be regarded with some skepticism. However, the Navy’s Virginia-class attack submarine (SSN) construction program has been performing very well, with some new SSNs being delivered ahead of schedule and below budget. Hopefully, the submarine community can maintain the good record of the Virginia-class SSNs program and deliver a similarly successful, on-time Columbia-class SSBN program.

For more information, refer to the 25 October 2016 report by the Congressional Research Service, “Navy Columbia Class (Ohio Replacement) Ballistic Missile Submarine (SSBN[X]) Program: Background and Issues for Congress,” which you can download at the following link:

You can read the Navy’s, “Report to Congress on the Annual Long-Range Plan for Construction of Naval Vessels for Fiscal Year 2017,” at the following link: