Everyone has heard about the atmospheric and underground nuclear tests that were conducted at the Nevada Test Site (NTS) from 1951 to 1992. NTS, which is about 394 miles (634 km) north of San Diego, CA, was the site of 928 nuclear tests.

Operation Dominic, was a series of 31 atmospheric or underwater nuclear tests conducted by the U.S. from April to October 1962 after the Soviet Union resumed atmospheric testing. One of the Operation Dominic tests occurred near San Diego, in the waters of the Pacific Ocean 426 miles (685 km) west of San Diego, CA at latitude 31° 14.7 N and longitude 124° 12.7’ W. This was U.S. nuclear test #238, code named Swordfish.

Swordfish was a live-fire test of a nuclear-armed RUR-5A ASROC (Anti-Submarine ROCket) that was armed with a W44 nuclear warhead with a yield estimated to be about 10 kilotons (kT). 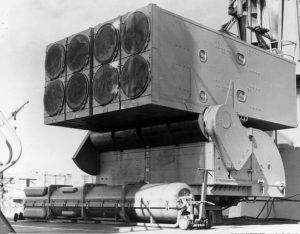 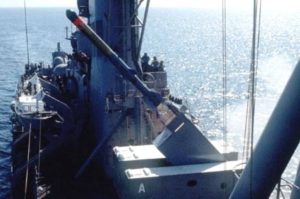 This was an operational test of the ASROC weapons system and a weapons effects test. The test would validate the nuclear-armed ASROC, which was being widely deployed in the fleet. In addition, the test would help define the effects of the nuclear detonation on the target and on nearby elements of an anti-submarine surface attack unit. The weapons effects data were needed to help the Navy establish a tactical doctrine for ASROC warhead delivery. The test sought to clarify tactical matters such as:

The test also sought to determine:

The nuclear-armed ASROC was fired from the destroyer USS Agerholm (DD-826) at a target 2.5 miles (4,348 yards / 4 km) away.  After the booster rocket burned out, the W44 nuclear depth charge warhead separated and flew a ballistic trajectory to the target. After impacting the water, the warhead sank to a prescribed depth, believed to be about 650 feet (198 meters) for the Swordfish test, before detonating. 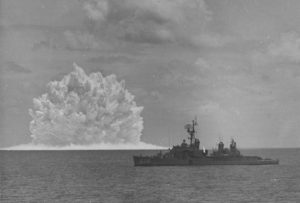 USS Agerholm in the foreground of the Swordfish test. Source: Navsource.org 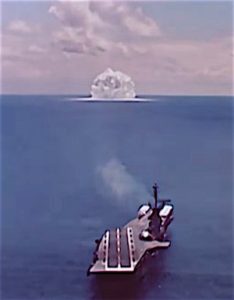 View from a helicopter trailing the USS Yorktown, 9,850 yards (3 km) from the Swordfish test. Source: Federation of American Scientists, fas.org

You can watch a short video clip of the Swordfish test from the perspective of the helicopter trailing USS Yorktown here:

You can watch a longer video on the Swordfish test at the following link:

Some key points reported by the Test Director were:

All ASROC nuclear warheads were removed from service in 1989.

You’ll find a complete listing of all U.S. nuclear tests in the Department of Energy’s December 2000 report, “United States Nuclear Tests July 1945 Through September 1992,” (DOE/NV—209-REV 15), which you can read and download here.