On 14 September 2015, the Laser Interferometer Gravitational-Wave Observatory (LIGO) ushered in a new era in astronomy and astrophysics by opening a part of the gravitational wave spectrum to direct observation. In my 17 February 2017 post,“Perspective on the Detection of Gravitational Waves,” I included the following graphic from an interview of Kip Thorne by Walter Issacson. 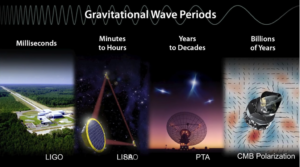 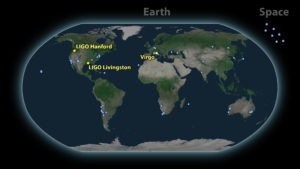 The ability to cue a worldwide array of multi-spectral observatories on short notice greatly added to the depth of understanding of the GW170817 event.  The international collaboration on this event was a great example of the benefits of “multi-messenger” astronomy. For more information, see my 25 October 2017 post, “Linking Gravitational Wave Detection to the Rest of the Observable Spectrum.”

At the 11 April 2018 Lyncean Group meeting, Dr. Rana Adhikari, Professor of Physics, Mathematics and Astronomy at Caltech, provided an update on LIGO in his presentation, “The Dirty Details of Detecting Gravitational Waves from Black Holes.” You can view Dr. Adhikari’s presentation slides at the following link:

As shown in the above graphic, viewing lower frequency (longer wavelength) gravitational waves requires different types of detectors, which are discussed below.

This will be a very long baseline, equilateral triangular laser interferometer in space, established of three spacecraft flying in formation in an Earth-trailing heliocentric orbit.  Each leg of the space interferometer will measure 2.5 million kilometers (1.55 million miles), about 625,000 times the length of the LIGO baseline (4 km, 2.49 miles). Each spacecraft will contain a gravitational wave detector sensitive at frequencies from about 10-4 Hz to 10-1 Hz, well below the frequency range of LIGO and VIRGO.

The European Space Agency’s (ESA) LISA Pathfinder spacecraft, which was launched in 2015 and ended its mission in July 2017, validated the technology for the LISA space interferometer. 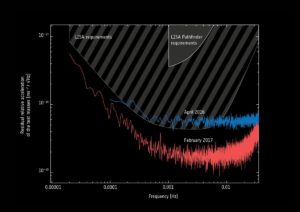 “Analysis of the LISA Pathfinder mission results towards the end of the mission (red line) compared with the first results published shortly after the spacecraft began science operations (blue line). The initial requirements (top, wedge-shaped area) and that of the future gravitational-wave observatory LISA (middle, striped area) are included for comparison, and show that LISA Pathfinder far exceeded expectations.”

The ESA is planning to launch LISA in the 2029 – 2032 timeframe.  See my 27 September 2016 post, “Space-based Gravity Wave Detection System to be Deployed by ESA,” for additional information on LISA.  The LISA mission website is at the following link:

A pulsar is a highly magnetized rotating neutron star or white dwarf that emits a beam of electromagnetic radiation. This radiation can be observed only when the beam is pointing toward Earth.

PTA gravitational wave detection is based on correlated radio-telescope observations of an array of many pulsars known as “millisecond pulsars” (MSPs).  The signal from an MSP has a very predictable time-of-arrival (TOA), thereby allowing each MSP to function as a galactic “clock.”  Small disturbances in each “clock” are measurable with high precision on Earth.  In essence, the distance between an MSP and the observing radio-telescope forms one leg of a gravitational wave detector, with the leg length being measured in light-years.  A disturbance from a passing gravitational wave would to have a measurable signature across the many MSPs in the pulsar timing array.

You’ll find more information on IPTA on their website at the following link:

On 10 April 2018, the Max Planck Institute for Gravitational Physics announced the formation of a permanent Max Planck Independent Research Group under the leadership of Dr. M. Alessandra Papa to search for continuous gravitational waves.  The primary goal of this research group is to make the first direct detection of gravitational waves from rapidly rotating neutron stars. You can read this announcement here:

The CBM is believed to be an artifact of the Big Bang and could carry evidence of the primordial gravitational waves from that era.  Such evidence would be expected to stretch across broad areas of the observable universe. 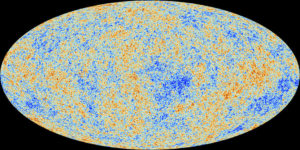 You’ll find more information on the Planck mission in my 28 September 2016 post, “The Universe is Isotropic.”

The North American Nanohertz Observatory for Gravitational Waves (NANOGrav) website contains the following summary chart, which is an alternate view of the chart at the start of this article (from the Kip Thorne / Walter Issacson interview).  The NANOGrav chart provides a good perspective on the observational technologies that are opening windows into the broad spectrum of gravitational waves and their varied sources. 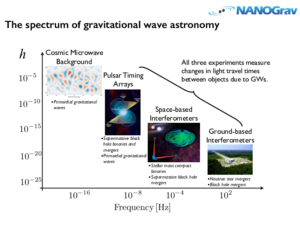 For more information on the current state of gravitational wave technology, you’ll find a good survey article by Davide Castelvecchia, entitled “Here Come the Waves,” in the 12 April 2018 issue of Nature, which you can read here: