“The primary goal of SC2 is to imbue radios with advanced machine-learning capabilities so they can collectively develop strategies that optimize use of the wireless spectrum in ways not possible with today’s intrinsically inefficient approach of pre-allocating exclusive access to designated frequencies. The challenge is expected to both take advantage of recent significant progress in the fields of artificial intelligence and machine learning and also spur new developments in those research domains, with potential applications in other fields where collaborative decision-making is critical.”

You can read the DARPA press release on the SC2 Grand Challenge at the following link:

SC2 is a response to the rapid growth in demand for wireless spectrum by both U.S. military and civilian users.  A DARPA representative stated, “The current practice of assigning fixed frequencies for various uses irrespective of actual, moment-to-moment demand is simply too inefficient to keep up with actual demand and threatens to undermine wireless reliability.”  The complexity of the current radio frequency allocation in the U.S. can be seen in the following chart. 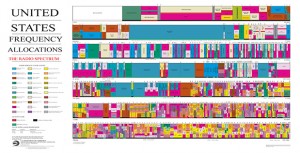 You can download a high-resolution PDF copy of the above U.S. frequency spectrum chart at the following link:

“Today, the FCC adopted rules to identify and open up the high frequency airwaves known as millimeter wave spectrum. Building on a tried-and-true approach to spectrum policy that enabled the explosion of 4G (LTE), the rules set in motion the United States’ rapid advancement to next-generation 5G networks and technologies.

The new rules open up almost 11 GHz of spectrum for flexible use wireless broadband – 3.85 GHz of licensed spectrum and 7 GHz of unlicensed spectrum. With the adoption of these rules, the U.S. is the first country in the world to open high-band spectrum for 5G networks and technologies, creating a runway for U.S. companies to launch the technologies that will harness 5G’s fiber-fast capabilities.”

You can download an FCC fact sheet on this decision at the following link:

These new rules change the above frequency allocation chart by introducing terrestrial 5G systems into high frequency bands that historically have been used primarily by satellite communication systems.