On 17 Oct 1979, VisiCalc was released for the Apple II, marking the birth of the spreadsheet for personal computers. In the past 35 years, the spreadsheet has become the now-ubiquitous tool used to compile everything from grocery lists to Fortune 500 company accounts. VisiCalc is often considered the application that turned the microcomputer from a hobby for computer enthusiasts into a serious business tool, and is considered the Apple II’s killer app. 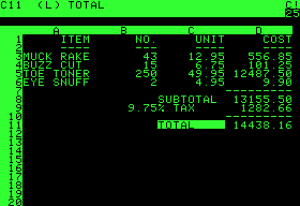 Other “killer apps” that changed our lives since personal computers became an indispensible office fixture are briefly described on the website: “Peter Coffees 25 Killer Apps of All Time”. Check it out at the following link: