Magnox reactors were the first generation of nuclear power plants developed in the UK. They were CO2-cooled, graphite moderated power reactors with natural uranium metal fuel. The name Magnox refers to the magnesium-aluminum alloy cladding on the metal fuel rods.

The first two Magnox sites, Calder Hall and Chapelcross, each had four dual-purpose reactors primarily intended to produce nuclear material for the UK nuclear weapons program, with the secondary role of generating electricity for UK’s national grid. The first unit at Calder Hall went critical in May 1956 and, on 27 August 1956, became the first UK nuclear power plant to connect to the national power grid. All subsequent Magnox plants were larger, two-unit commercial nuclear power plants. The UK’s fleet of Magnox plants reached a total of 26 units at 11 sites. On 30 December 2015, the final Magnox plant, Wylfa unit 1, ceased generation after operating for 44 years. This milestone ended 59 years of Magnox reactor operation in the UK.

Following is a brief overview of this pioneering reactor type.

A Magnox reactor has a large reactor core that operated at low power density (< 1 kW/liter) and relatively temperatures, which enabled the use of uranium metal fuel and Magnox cladding. The relatively low operating pressure (typically 130 – 150 psig) of the primary circuit enabled the use mild steel for the primary pressure boundary. 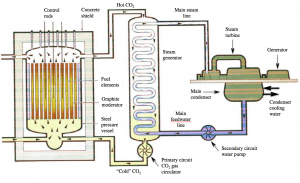 The first two 2-unit Magnox commercial power stations were Berkeley and Bradwell, which were followed by seven more 2-unit Magnox stations in the UK. The physical arrangement of Magnox plants varied significantly from plant to plant, as designers revised gas circuit designs, refueling schemes (top or bottom refueling), and other features. The following diagrams show the differences between the Hinkley Point and later Sizewell gas circuits. 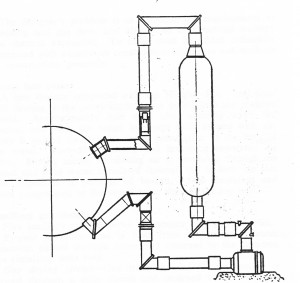 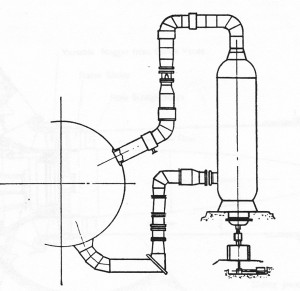 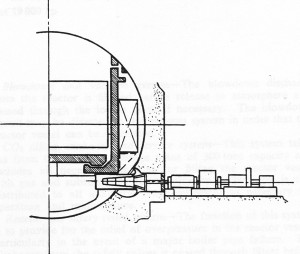 The basic gas and fluid flow paths in the Oldbury and Wylfa Magnox plants are shown in the following diagram. Note that steam generator modules surrounding the reactor core inside the PCRV. 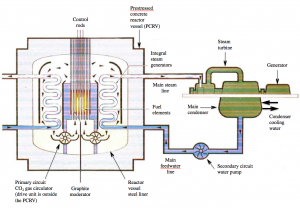 A generic issue for all Magnox plants was the corrosion of mild steel components by the high temperature CO2 coolant. To manage this issue, the average core outlet gas temperature was reduced from the original design temperature of 414 °C to 360 – 380 °C, with a corresponding decrease in net power output and thermal efficiency.

None of the Magnox reactors are enclosed in a pressure-retaining containment building, as is common practice for most other types of power reactors. In the early Magnox plants, only the reactor was inside an industrial-style building , while the steam generators and parts of the primary circuit piping were outside the building, as shown in the following diagram of a single unit at Calder Hall. The steam generators were enclosed in later plants, primarily to protect them from the weather. 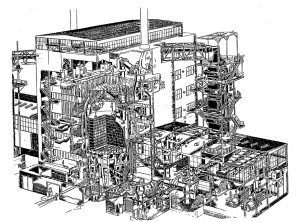 Accident conditions in a Magnox reactor are very different than in a water-cooled reactor. Magnox reactors do not encounter coolant phase change during an accident or have a risk of the core becoming “uncovered” because of a loss of coolant through a breach in the primary circuit. The low core power density, the large heat capacity of the graphite moderator, and the availability of natural circulation flow paths for core cooling limit post-accident core temperatures. On this basis, Magnox reactors were permitted to operate with three barriers to the release of fission products to the atmosphere: the metal fuel matrix, the Magnox fuel cladding, and the mild steel primary circuit pressure boundary.

UK’s successor to the Magnox:

The UK’s second generation commercial power reactor is the Advanced Gas-cooled Reactor (AGR), which is a more advanced, higher-temperature, CO2-cooled, graphite moderated reactor with stainless steel clad, enriched UO2 fuel. The UK’s fleet of AGRs totals 14 units at 6 sites. All are currently operating. Retirement of the oldest units is expected to start in about 2023.

In the early 1950s, the UK and France arrived at the same basic fuel / coolant / moderator selection for their first generation power reactors:

This choice was driven largely by the desire for nuclear independence and the unavailability of enriched uranium, which the U.S. refused to export, and heavy water (moderator), which was not available in significant quantities.

In France, these reactors were known as UNGG (Uranium Naturel Graphite Gaz), which were developed independently of the UK Magnox reactors. All UNGGs used magnesium-zirconium alloy fuel cladding instead of the Magnox magnesium-aluminum alloy.

The first UNGGs were the dual-use Marcoule G2 and G3 reactors, which produced nuclear material for the French nuclear weapons programs and also had a net electric power output of about 27 MWe. The horizontal reactor core was housed in a steel-lined PCRV with external steam generators. 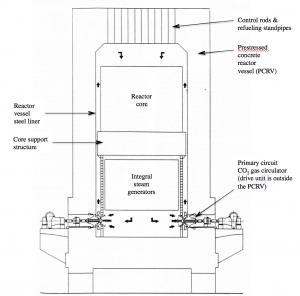 France exported to Spain one UNGG similar to the Saint Laurent-des-Eaux plant. This became the 508 MWe Vandellos unit 1 power plant, which operated from 1972 to 1990.

French successor to the UNGG:

North Korea’s Yongbyon nuclear plant is a CO2-cooled, graphite-moderated reactor with natural uranium fuel. This is a logical choice of reactor type because natural uranium and graphite are domestically available in North Korea. Yongbyon is believed to be a dual-use production reactor that is modeled after the UK’s Calder Hall Magnox reactor.

Yongbyon is believed to have a thermal power in the 20 – 25 MWt range and a net electrical output of about 5 MWe. Reactor operation began in 1986. In 2007, operation of Yongbyon was disabled when the cooling towers were demolished to comply with an international agreement related to preventing North Korean production of nuclear material. On 2 April 2013, North Korea announced it would restart Yongbyon. NTI reported that Yongbyon has been operating since September 2013. See details at the following link: