If you will be driving the UK’s Bloodhound supersonic car (SSC) in 2019, you really care about the answer to that question.

Hakskeen Pan is a very flat region in the Northwestern corner of South Africa, and it is the site selected by the Bloodhound Project team for a 16 km (9.94 mile) track that will be used for their world land speed record attempt. 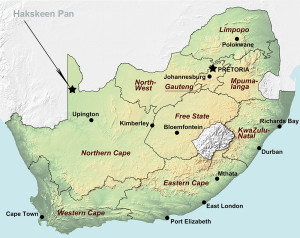 So, how flat is Hakskeen Pan and how much does it matter to a land speed record car traveling at 1,000 mph (1,609 kph)? The Cape Town, South Africa, survey company Lloyd & Hill surveyed the entire 16 km by 500 meter wide track surface (an area of about 8 million square meters) measuring the elevation in each square meter to an accuracy of 10 mm (0.39 in) or less. Using laser-scanning technology to collect data, and some considerable computing resources, Lloyd & Hill reduced four billion laser measurements into a 3-dimensional surface map of Hakskeen Pan. Key findings were: 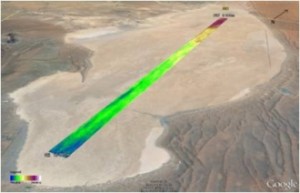 The Bloodhound SSC has independent double-wishbone suspension on all four wheels. Preliminary dynamic analysis of the Bloodhound SSC’s suspension response to the measured surface irregularities shows that the vehicle should not be subject to loads of more than 1.0 – 1.5 g during it’s world land speed record attempt.   The suspension is designed to cope with up to 4 g.

Check out the details of the Hakskeen Pan site survey and the vehicle dynamic analysis at the following link:

Also check out the Education tab on the Bloodhound Project website. I think you will be pleased to see how this exciting engineering project is working to engage with and inspire the next generation of scientists and engineers. 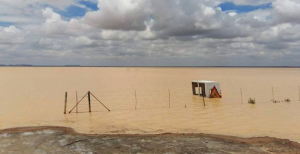 “This particular flood was caused mainly by the rain in Namibia and flooding from the rivers, rather than actual rainfall on the Pan and surrounding catchment area, as there are many rivers that flow into the Pan.

Having the desert flood like this is very good news for us, as flooding helps to repair the surface from any damage that may have been caused in the final preparation and clearance of the desert, and it helps to create the best possible surface for land speed record racing.”

Read more at the following link: