Evidence is mounting that a supermassive black hole named Sagittarius A* (Sagittarius A star) dominates the center of our Milky Way galaxy. Long-term observations of the galactic center by teams of astronomers are refining our understanding of how stars move in relation to this unseen black hole.

The ESO, which has many observatories located high in the mountains of northern Chile, has a team involved in observing our galactic center. Two of the ESO optical observatories used in this effort are:

On 10 December 2008, ESO issued a “science release” entitled, ”Unprecedented 16-Year Long Study Tracks Stars Orbiting Milky Way Black Hole,” which summarized the results of observations made at NTT and VLT from 1992 to 2008. This study mapped the orbits of 30 stars in the region around the galactic center (and did not use VLT’s interferometric capabilities).

Stars near our galactic center and the Sagittarius A* black hole. Source: eso0846 Science Release

The eso0846 science release is available at the following link:

In connection with this study, the ESO team also created a time-lapse video showing star motion around the Sagittarius A* black hole.

“Here, actual images, collected over the past 16 years, have been assembled into a time-lapse video. The real motion of the stars has been accelerated by a factor 32 million.”

This time-lapse video covers the central part of the above color image of the galactic center and shows stars moving around central point that is likely to be the black hole. You can see this animated sequence at the following link:

The mission statement of the UCLA Galactic Center Group is:

“Transforming our understanding of Black Holes and their role in the Universe with high resolution observations of the Center of our Galaxy!”

The Galactic Center Group’s website is a good source of information on black hole science and the technologies employed to observe our galactic center. Their home page is at the following link:

The W.M. Keck Observatory on Mauna Kea in Hawaii is comprised of two large telescopes, each with 10 m (33 ft) main mirrors and adaptive optics. Currently the Keck Observatory has the largest optical / infrared telescopes in the world. These telescopes have higher resolution than ESO’s NTT and VLT.

Using images taken at the Keck Observatory from 1995 to 2014, the UCLA Galactic Center Group and the W.M. Keck Observatory Laser Team have released their determination of the orbits of stars within the central 1.0 X 1.0 arcseconds of our galaxy, as shown in the following diagram. 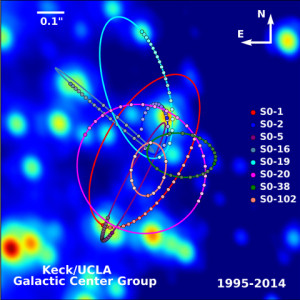 “These orbits provide the best evidence yet for a supermassive black hole. While every star in this image has been observed to move since 1998, estimates of orbital parameters are best constrained for stars that have been observed through at least one turning point of their orbits.”

This makes the star S0-2 especially important because it has been observed for more than one full orbital period, which for S0-2 is only 16.17 years. The team estimates that the Sagittarius A* black hole has a mass of 4 million times the mass of the Sun.

The UCLA Galactic Center Group and the W.M. Keck Observatory Laser Team have created a series of animations that demonstrate the motion of stars near the Sagittarius A* black hole. You can navigate to these animations from the home page listed above or use the following direct link:

The three animations showing star motions around the Sagittarius A* black hole are:

The importance of adaptive optics is astronomical observations is demonstrated in another animation from the UCLA Galactic Center Group.

“This animation shows observations of the Galactic Center with and without adaptive optics, illustrating the resolution gain. Adaptive optics corrects for the blurring effects of the Earth’s atmosphere. Using a bright star, we measure how a wavefront of light is distorted by the atmosphere and quickly adjust the shape of a deformable mirror to remove these distortions.” 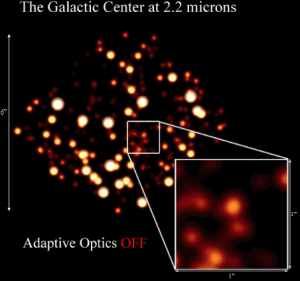 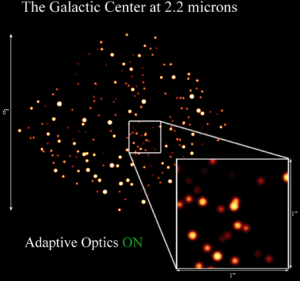 In my 6 June 2015 post, “Three Very Large, New Optical Telescopes are Under Development,” I reported on the Thirty Meter Telescope (TMT), which originally was planned for construction on Mauna Kea, near the Keck Observatory. As the name implies, TMT will have a 30 m (98.4 ft) main mirror and adaptive optics. To illustrate the improved resolution of TMT, the UCLA Galactic Center Group developed an animation showing Sagittarius A* images for the following three cases:

As you can see in the following screenshot from this animation, the expected results from the much higher resolution TMT quite impressive.

TMT’s actual construction site is being reconsidered and construction has been delayed. However, ESO has broken ground for the even larger European Extremely Large Telescope (E-ELT), which is being built now at Cerro Armazones, Chile. This giant telescope has a 39 m (128 ft) main mirror and adaptive optics. It will become the largest optical / infrared telescope in the world when it is commissioned as part of ESO’s Paranal Observatory in 2024. Hopefully, time on this great telescope will be allocated to observing our galactic center.