The Dawn spacecraft is the only spaceship built to orbit two extraterrestrial bodies; the large asteroid Vesta and the dwarf planet Ceres, both of which are in the main asteroid belt between Mars and Jupiter. You can see that Vesta and Ceres are quite small in comparison to Earth’s moon. 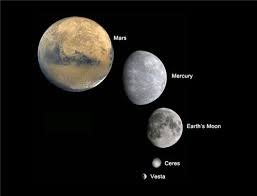 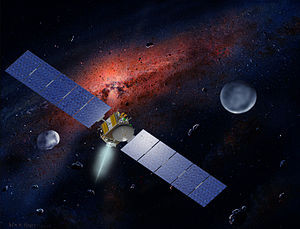 Launched in September 2007, Dawn made a gravity-assist flyby of Mars before reaching Vesta in July 2011 and remaining in orbit for about 14 months.

View of Vesta from Dawn 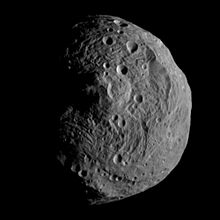 From the collected data, NASA created a 360 degree view of Vesta, which you can see at the following link:

Using its ion propulsion system, Dawn departed Vesta in September 2012 and headed for it’s rendezvous with Ceres, arriving in orbit on 6 March 2015. You can read about the orbital insertion and see a 360 degree view of Ceres at the following link:

Dawn’s initial orbit was at an altitude of 8,400 miles above Ceres. Over the next month, Dawn is using it’s ion propulsion system to spiral down to a “survey orbit” 2,700 miles above Ceres. After the survey is complete, the ion propulsion system will be used again to spiral down gradually to a 910 mile “high-altitude mapping orbit”. Late in 2015, the spacecraft will descend again until it reaches a “low altitude mapping orbit” at an altitude of 230 miles. Because of the very low thrust of the ion propulsion engines, the transitions between orbits takes a long time (several weeks). You can read the details about the in-orbit management of the spacecraft at the following link: