In a stand-alone robot, the space and power needed for advanced computational resources compete with the space and power needed for everything else that makes up the robotic device. Concepts being developed by the four-year RoboEarth project, a European Community funded program that created an open source platform for cloud robotics, are pointing the way to placing computationally-intensive robotic applications and related “big data” resources in the cloud. With adequate bandwidth for high-speed communication between the cloud and the distributed robotic devices in the field, the robots themselves can be simpler and less expensive, while gaining performance and cognitive advantages from having a significant fraction of their computational requirements off-loaded to the cloud.

A simplified view of the RoboEarth network architecture is shown in the following diagram. 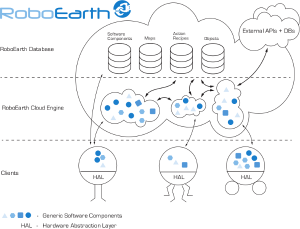 It seems straightforward, but I find it a little disquieting that the Hardware Abstraction Layer at each robot is abbreviated as “HAL.”