For satellites large enough to generate reentry debris that can reach the surface of the Earth, there are four choices: Manitowoc, WI, the Spacecraft Cemetery, a Graveyard Orbit, or the Space Garbage Truck. Let’s look at these alternatives.

Korabi-Sputnik 1 (aka Sputnik 4) was launched by the Soviet Union on 15 May 1960 and was reported to be a test of an orbital spacecraft with a recoverable, pressurized capsule capable of carrying a cosmonaut. At the time of its launch, Sputnik 4 was the largest satellite placed in orbit, with a weight of at least 5 tons.

Sputnik 4 appears to have been a prototype of the Soviet Vostok spacecraft that carried the first human, Yuri Gagarin, into orbit on 12 April 1961. 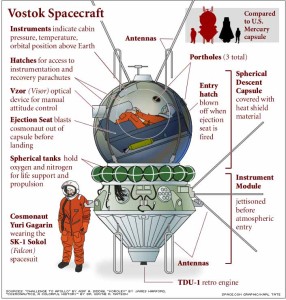 Due to a failure in the control or reentry system, the Sputnik 4 capsule did not return to Earth as planned, but instead, remained in orbit until 5 September 1962. On that day, Sputnik 4 reentered the Earth’s atmosphere and broke up, with fragments landing in Lake Michigan and in downtown Manitowoc, WI. The following diagram from the 3 December 1962 issue of Aviation Week magazine shows the paths for Sputnik 4 fragments that landed on the main street of Manitowoc, Wisconsin. 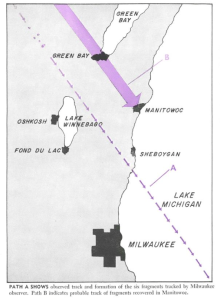 On a recent trip, I visited the site in Manitowoc where a large, hot fragment landed and embedded itself into the asphalt pavement of a main street. That site is commemorated by a brass ring in the street and a granite plaque on the sidewalk. 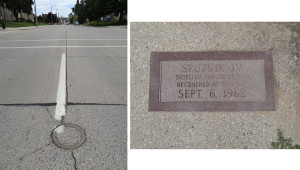 The Sputnik 4 debris was analyzed by the U.S. and then returned to the Soviet Union. The following photos from the 3 December 1962 issue of Aviation Week magazine show details of the largest fragment. 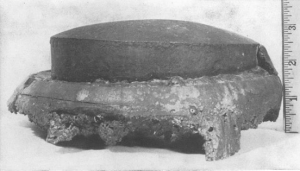 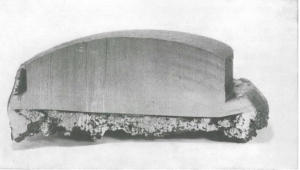 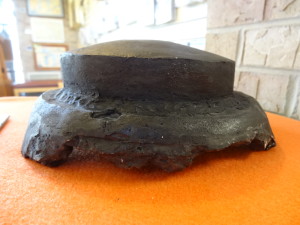 You can read more about Sputnik 4 in the article, “Sputnik Crashed Here,” at the following link:

Today, there is a systematic process for de-orbiting larger satellites in low Earth orbit that can produce reentry debris capable of reaching the Earth’s surface. NASA reports:

“There is a solution—spacecraft operators can plan for the final destination of their old satellites to make sure that any debris falls into a remote area. This place even has a nickname—the Spacecraft Cemetery! It’s in the Pacific Ocean and is pretty much the farthest place from any human civilization you can find.” 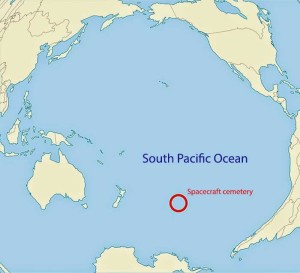 NASA has developed plans for de-orbiting the >500 ton International Space Station (ISS) at the end of its operational life, which is expected to last until at least 2028. There also is a plan to de-orbit the ISS if it must be evacuated in an emergency and cannot be recovered. You’ll find more information on NASA’s plans at the following link:

When the time comes, ISS reentry will be targeted for the Spacecraft Cemetery.

Spacecraft in higher orbits, including geosynchronous orbit, commonly are maneuvered into “graveyard orbits” where they are retired, outside the orbits of other active satellites. Here they will remain for a very long time without significant risk of interfering with active satellites or de-orbiting in an uncontrolled reentry.

An example is the Lincoln Experimental Satellite 5 (LES-5), which was developed by the MIT Lincoln Laboratory and launched into synchronous orbit in 1967 to test satellite-based ultra-high frequency (UHF) secure communications for US military users.  The solar-powered LES-5 remained active until May 1971 after which it was decommissioned and moved to a higher graveyard orbit in 1972.  On 24 March 2020, Scott Tilley, an amateur radio operator living in British Columbia, announced that he had located a signal from the LES-5 satellite at 237 MHz, transmitting at about 100 bits/sec from its graveyard orbit.  You’ll find more details on the “re-discovery” of LES-5 here:

A new option is under development by the European Space Agency (ESA), which launched the Clean Space Initiative in 2013 to address the great amount of debris and dead satellites in Earth orbit.  ESA reported:

Any of these objects can cause harm to an operational satellite. For example, a collision with a 10 cm object would entail a catastrophic fragmentation of a typical satellite, a 1 cm object will most likely disable a spacecraft and penetrate the International Space Station shields, and a 1 mm object could destroy subsystems. Scientists generally agree that, for typical satellites, a collision with an energy-to-mass ratio exceeding 40 J/g would be catastrophic.”

The ESA’s warning signs posted in orbit proved to be ineffective. 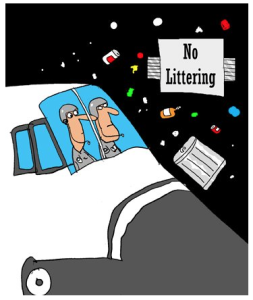 Therefore, ESA is planning a more ambitious mission called e.DeOrbit for removing space debris.  For its demonstration mission, the ESA e.DeOrbit spacecraft is being designed to capture debris in polar orbit between 800 – 1,000 km (497 – 621 miles) altitude. Various concepts are being considered to capture the intended orbital target, including nets, arms, and tentacles. Once captured, the e.DeOrbit spacecraft will maneuver the combined satellite (target + e.DeOrbit) into a controlled reentry. The first launch of an e.DeOrbit garbage truck is expected to be in the 2023 time frame. 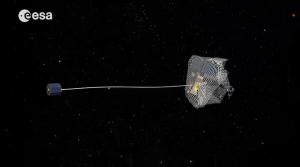 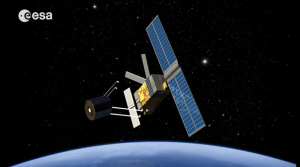 You can read more on the ESA Clean Space Initiative and the e.DeOrbit mission at the following links: