Along San Diego Bay, you’ll see a great variety of military and civilian vessels. The San Diego Port District has posted a chart on Shelter Island to help tourists and locals identify the more common types of Navy ships that are based here. Occasionally, you might be treated to the sight of an uncommon vessel, such as the catamaran USNS Minninocket (JHSV-3), shown below. This ship is owned and operated for the Navy by the Military Sealift Command. 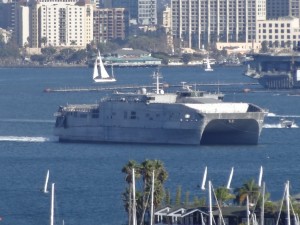 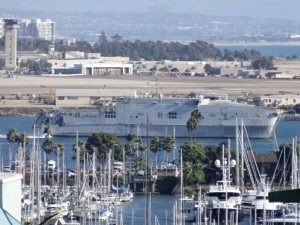 JHSV ships are fast, modest-sized, non-combatant vessels designed to transport about 600 tons troops and equipment. Their modular design enables rapid reconfiguration of the 20,000-ft2 cargo bay to support various missions. For example, a JHSV vessel can accommodate an Army or Marine Corps company-sized unit (typically 80 – 250 troops) and vehicles, or be reconfigured to transport up to 312 troops. 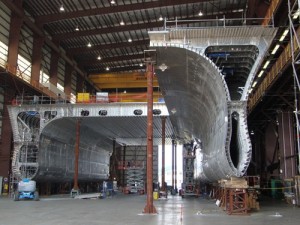 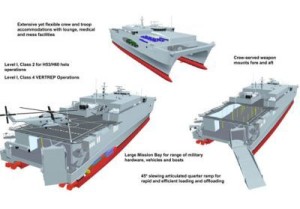 Ship propulsion is provided by four 12,200 hp (9.1 MW) diesel engines in the catamaran pods driving waterjets that deliver a maximum speed of about 43 kts. Range is about 1,200 miles at 35 kts. The ship has facilities for one helicopter. As of the FY 2015 budget, 11 JHSVs have been funded.

You can read a summary of this Navy ship program, including the status of resolving FY 2013 and FY 2014 recommendations for improvement and new FY 2015 recommendations, at the following link:

You can watch a short video on this intriguing vessel at the following link:

In 2016, the Navy plans to conduct shipboard tests of the BAE Systems prototype electromagnetic railgun aboard USNS Trenton (JHSV-5), including live firing GPS-guided hyper-velocity projectiles (HVP) at targets 20 miles or more away. While the JHSV is a non-combatant, it was chosen for this test program because of the availability of adequate space in the cargo hold and topside for the prototype weapon system. An artist rendering of the planned railgun installation is shown below. 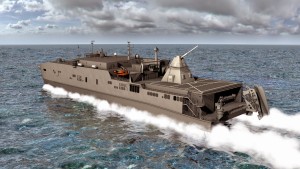 The Navy has contracted for 10 of the shallow-draft Expeditionary Fast Transports (EPFs) from Austal USA, which constructs these ships at its Mobile, AL shipyard. Five EPFs have been delivered and have made deployments to Africa, the Middle East and the Far East. The 6th ship, USNS Brunswick, was just delivered to the Navy on 14 January 2016. Four more ships (EPF-7 to EPF-10) remain to be delivered under the current contract. EPF-11 and -12 have been funded by Congress in the 2015 and 2016 omnibus appropriations bills, but contracts with the Navy remain to be finalized.

Operating as part of the U.S. Navy’s Military Sealift Command, EPFs are intended primarily for use in littoral waters. However, they are expected to be able to make fast open ocean transits and operate with other Navy units in the open ocean.

The lead ship, USNS Spearhead, was damaged in moderate seas while transiting the Atlantic en route to Europe in September 2014. The ship took a significant pounding from wave slamming onto the “forepeak”, which is the bottom of the foremost part of the flat hull section spanning the two catamaran hulls. Repairs to the ship cost about $511,000. The repairs included structural reinforcement of the bow, which added 1,736 pounds to the ship’s weight and displaced about 250 gallons of fuel. 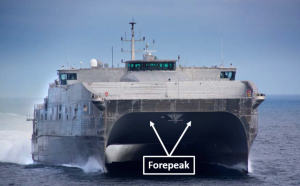 Key points in this report related to the weak bow are:

In addition to the bow structural problems, Michael Gilmore’s report noted that the EPFs have the following significant problems:

You can download Michael Gilmore’s complete report at the following link:

Short summary articles on these matters are available at the following links to Bloomberg Business and Seapower:

For additional commentary on problems associated with bow damage to vessels operating in the open ocean, I refer you to the short video at the following link: