The Arctic Council describes itself as, “….the leading intergovernmental forum promoting cooperation, coordination and interaction among the Arctic States, Arctic indigenous communities and other Arctic inhabitants on common Arctic issues, in particular on issues of sustainable development and environmental protection in the Arctic.” The council consists of representatives from the eight Arctic states:

One outcome of the Arctic Council’s 2004 Senior Arctic Officials (SAO) meeting in Reykjavik, Iceland was a call for the Council’s Protection of the Arctic Marine Environment (PAME) working group to conduct a comprehensive Arctic marine shipping assessment as outlined in the AMSP. The key result of that effort was The Arctic Marine Shipping Assessment 2009 Report (AMSA), which you can download here: 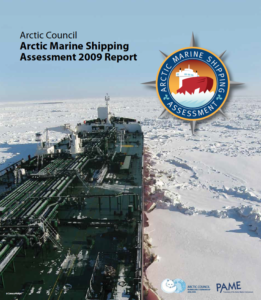 This report provided a total of 17 summary recommendations for Arctic states in the following three areas:

A. Coordinating with international organizations to harmonize a regulatory framework for Arctic maritime safety.

B. Supporting International Maritime Organization (IMO) standards for vessels operating in the Arctic.

C. Developing uniform practices for Arctic shipping governance, including in areas of the central Arctic ocean that are beyond the jurisdiction of any Arctic state.

A. Conducting surveys of Arctic marine use by indigenous people

A. Improving the Arctic infrastructure to support development while enhancing safety and protecting the Arctic people and environment, including icebreakers to assist in response.

The AMSA 2009 Report is a useful resource, with thorough descriptions and findings related to the following:

Four status reports from 2011 to 2017 documented the progress by Arctic states in implementing the 17 summary recommendations in AMSA 2009. The fourth and final progress report entitled, “Status of Implementation of the AMSA 2009 Report Recommendations; May 2017,” is available at the following link: 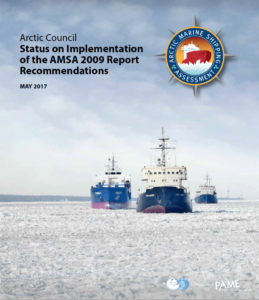 Through PAME and other working groups, the Arctic Council will continue its important role in implementing the Arctic Marine Strategic Plan. You can download the current version of that plan, for the period from 2015 – 2025, here: 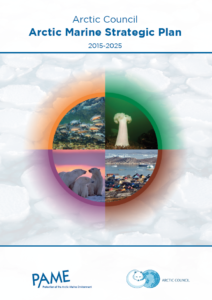 For example, on 6 November 2017, the Arctic Council will host a session entitled, “The global implications of a rapidly-changing Arctic,” at the UN Climate Change Conference COP23 meeting in Bonn, Germany. For more information on this event, use this link: