On 15 September 2016, the National Snow and Ice Data Center (NSIDC) in Boulder, CO reported their preliminary assessment that the Arctic sea ice minimum for this year was reached on 10 September 2016. 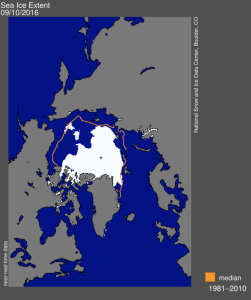 The 2016 minimum tied with 2007 for the second lowest Arctic sea ice minimum on record.

You can read the NSIDC preliminary report on the 2016 Arctic sea ice minimum at the following link:

An historic event in the Arctic occurred in September 2016 when the commercial cruise liner Crystal Serenity, escorted by the RRS Shackleton, made the first transit of the Northwest Passage by a cruise liner. The voyage originated in Vancouver, Canada and arrived in New York City on 16 September 2016. The timing of this Arctic cruise coincided well with this year’s minimum sea ice conditions. See my 30 August 2016 post for more details on the Crystal Serenity’s historic Arctic voyage.