The accident at Chernobyl Unit 4 occurred on 26 April 1986.  A post-accident view of the Unit 4 reactor building is shown below.

A temporary “sarcophagus” was hastily erected around Unit 4 to provide some protection for the recovery workers and the public, to stabilize the damaged building and protect its interior from the effects of weather.  Since November 2016, Unit 4 has been fully enclosed within the more substantial New Safe Confinement (NSC) building.  You’ll find a good overview of the NSC at the Chernobyl Gallery website here:  http://www.chernobylgallery.com/chernobyl-disaster/new-safe-confinement/

On 5 May 2021, Richard Stone, writing for Science magazine, reported online that, “Sensors are tracking a rising number of neutrons, a signal of fission, streaming from one inaccessible room, Anatolii Doroshenko of the Institute for Safety Problems of Nuclear Power Plants (ISPNPP) in Kyiv, Ukraine, reported last week during discussions about dismantling the reactor..….ever since its (the NSC) emplacement, neutron counts in most areas in the Shelter have been stable or are declining. But they began to edge up in a few spots, nearly doubling over 4 years in room 305/2, which contains tons of FCMs (fuel containing material) buried under debris.” Modeling by the ISPNPP suggests that the increasing neutron count rates may be related to the gradual drying of the FCMs.  Other phenomena may be contributing, such as the observed long-term disintegration and change of consistency of some FCM formations in the rubble.

The ceiling of room 305/2 was directly under the Unit 4 reactor core.  From the force of the accident, that ceiling was driven down by almost four meters.

The original inventory of uranium in the Unit 4 core was about 180 metric tons enriched to 3%. In a French-German study of the condition of the Chernobyl sarcophagus, authors G.G. Pretzsch, et al. reported that about 96% of the original nuclear fuel inventory remained inside the sarcophagus.  The distribution was estimated as summarized in the following table.  The authors estimated that about one-half of the total fuel mass was in Room 305/2.

The condition of room 305/2 is described in considerable detail (in Russian) in the 1998 IAEA Report INIS-UA—062, “Room 305/2 Block 4 of the Chernobyl NPP: Its Condition, Assessment of the Amount of Fuel.”  The room is a jumble of damaged building structural elements, reactor parts, and FCM in various forms, including “lava” flows.

The authors reported on estimates developed using a variety of methods, as summarized in the following table, and concluded that the best estimate for room 305/2 was ≥ 60 metric tons of uranium.

You’ll find my machine translation of this IAEA report to English, including the legend for the above figure, at the following link: https://lynceans.org/wp-content/uploads/2021/05/Chernobyl-Room-305_2-Assessment.pdf

Ukraine has long intended to remove the FCMs from the Unit 4 debris and store them in a geological repository. This plan remains under development, but now may have a new sense of urgency.

Following the Chernobyl accident on 26 April 1986, a concrete and steel “sarcophagus” was built around the severely damaged Unit 4 as an emergency measure to halt the release of radioactive material into the atmosphere from that unit. For details on the design and construction of the sarcophagus, including many photos of the damage at Unit 4, visit the chernobylgallery.com website at the following link:

The completed sarcophagus is shown below, at left end of the 4-unit Chernobyl nuclear plant. In 1988, Soviet scientists announced that the sarcophagus would only last 20–30 years before requiring restorative maintenance work. They were a bit optimistic. 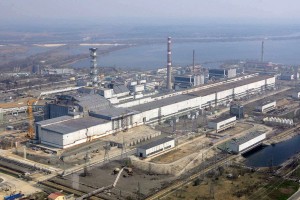 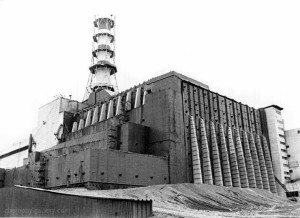 Close-up of the sarcophagus. Source: chernobylgallery.com

Cross-section of the sarcophagus. Source: chernobylgallery.com

The sarcophagus rapidly deteriorated. In 2006, the “Designed Stabilization Steel Structure” was extended to better support a damaged roof that posed a significant risk if it collapsed. In 2010, it was found that water leaking through the sarcophagus roof was becoming radioactively contaminated as it seeped through the rubble of the damaged reactor plant and into the soil.

To provide a longer-term remedy for Chernobyl Unit 4, the  European Bank of Reconstruction and Development (EBRD) funded the design and construction of the New Safe Confinement (NSC, or New Shelter) at a cost of about €1.5 billion ($1.61 billion) for the shelter itself. Total project cost is expected to be about €2.1 billion ($2.25 billion).

Construction by Novarka (a French construction consortium of VINCI Construction and Bouygues Construction) started in 2012. The arched NSC structure was built in two halves and joined together in 2015. The completed NSC is the largest moveable land-based structure ever built, with a span of 257 m (843 feet), a length of 162 m (531 feet), a height of 108 m (354 feet), and a total weight of 36,000 tonnes. 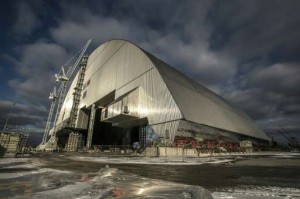 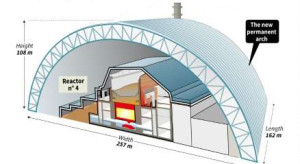 Novarka started moving the NSC arch structure into place on 14 November 2016 and completed the task more than a week later. The arched structure was moved into place using a system of 224 hydraulic jacks that pushed the arch 60 centimeters (2 feet) each stroke. On 29 November 2016, a ceremony at the site was attended by Ukrainian president, Petro Poroshenko, diplomats and site workers, to celebrate the successful final positioning of the NSC over Chernobyl Unit 4.

EBRD reported on this milestone:

“Thirty years after the nuclear disaster in Chernobyl, the radioactive remains of the power plant’s destroyed reactor 4 have been safely enclosed following one of the world’s most ambitious engineering projects.

Chernobyl’s giant New Safe Confinement (NSC) was moved over a distance of 327 meters (1,072 feet) from its assembly point to its final resting place, completely enclosing a previous makeshift shelter that was hastily assembled immediately after the 1986 accident.

You can see EBRD’s short video of this milestone, “Unique engineering feat concluded as Chernobyl arch reaches resting place,” at the following link

The NSC has an expected lifespan of at least 100 years.

The NSC is fitted with an overhead crane to allow for the future dismantling of the existing sarcophagus and the remains of Chernobyl Unit 4.

The reactor accident at Chernobyl  Unit 4 occurred on 26 April 1986.  The  European Bank of Reconstruction and Development (EBRD) is funding a remarkable project to build and install a “permanent” containment structure over the entire damaged unit. This will be the largest movable structure ever constructed. 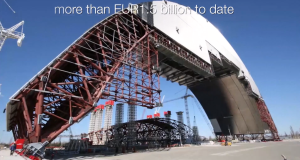 Read more about this EBRD project and see a video that explains how the structure will be moved into place at the following link: