A 7 September 2016 article entitled, “It’s official: You’re lost in a directionless universe,” by Adrian Cho, provides an overview of research that demonstrates, with a high level of confidence, that the universe is isotropic. The research was based on data from the Planck space observatory. In this article, Cho notes:

“Now, one team of cosmologists has used the oldest radiation there is, the afterglow of the big bang, or the cosmic microwave background (CMB), to show that the universe is “isotropic,” or the same no matter which way you look: There is no spin axis or any other special direction in space. In fact, they estimate that there is only a one-in-121,000 chance of a preferred direction—the best evidence yet for an isotropic universe. That finding should provide some comfort for cosmologists, whose standard model of the evolution of the universe rests on an assumption of such uniformity.”

The European Space Agency (ESA) developed the Planck space observatory to map the CMB in microwave and infrared frequencies at unprecedented levels of detail. Planck was launched on 14 May 2009 and was placed in a Lissajous orbit around the L2 Lagrange point, which is 1,500,000 km (930,000 miles) directly behind the Earth. L2 is a quiet place, with the Earth shielding Planck from noise from the Sun. The approximate geometry of the Earth-Moon-Sun system and a representative spacecraft trajectory (not Planck, specifically) to the L2 Lagrange point is shown in the following figure. 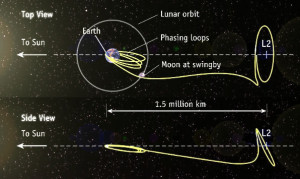 The Planck space observatory entered service on 3 July 2009. At the end of its service life, Planck departed its valuable position at L2, was placed in a heliocentric orbit, and was deactivated on 23 October 2013. During more than four years in service, Planck performed its CBM mapping mission with much greater resolution than NASA’s Wilkinson Microwave Anisotropy Probe (WMAP), which operated from 2001 to 2010.  Planck was designed to map the CMB with an angular resolution of 5-10 arc minutes and a sensitivity of a millionth of a degree.

One key result of the Planck mission is the all-sky survey shown below. 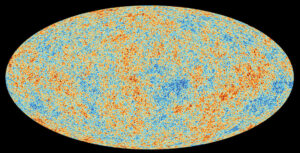 ESA characterizes this map as follows:

“The CMB is a snapshot of the oldest light in our Universe, imprinted on the sky when the Universe was just 380,000 years old. It shows tiny temperature fluctuations that correspond to regions of slightly different densities, representing the seeds of all future structure: the stars and galaxies of today.”

The researchers who reported that the universe was isotropic noted that an anisotropic universe would leave telltale patterns in the CMB. However, these researchers found that the actual CMB shows only random noise and no signs of such patterns.

The researchers who reported that the universe was isotropic noted that an anisotropic universe would leave telltale patterns in the CMB.  However, these researchers found that the actual CMB shows only random noise and no signs of such patterns.

In 2015, the ESA / Planck Collaboration used CMB data to estimate the age of the universe at 13.813 ± 0.038 billion years.  This was lightly higher than, but within the uncertainty band of, an estimate derived in 2012 from nine years of data from NASA’s Wilkinson Microwave Anisotropy Probe (WMAP) spacecraft.

The ESA/Planck Collaboration described these two new maps as follows:

You’ll find more details on the Planck mission and scientific results on the ESA’s website at the following link: http://www.esa.int/Our_Activities/Space_Science/Planck